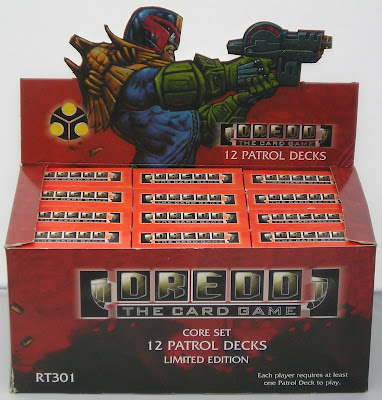 In 1999 word ‘leaked’ out that there was a card game coming out from the world of Dredd, by Round Table Productions. Obviously I contacted the company as soon as I heard the news and very kindly they sent me a load of info about the planned release. So I kept watch of their website and waited and waited, until eventually I could join ‘as a judge player’ and start collecting.
The first release was a 300-card set, issued in 60 card patrol decks (with rule book) and 11 card backup packs. There was a future expansion set planned of between 120-150 cards all about the SJS, alas this never saw the light of day.


The card breakdown was as follows: -
300 cards: -
50 Vital
75 Common
75 Uncommon
100 Rare
These broke down into the following sets: -
Judges 50
Resources 35
Crimes 25
Scenes 30
Perps 50
Incidents 90
Events 20
Here are a few of those cards from my signed collection, just to give you an idea of their design, as each set had a slighlty different layout. The last four (unsigned) cards were given away at certain times during the run up and release of the game. 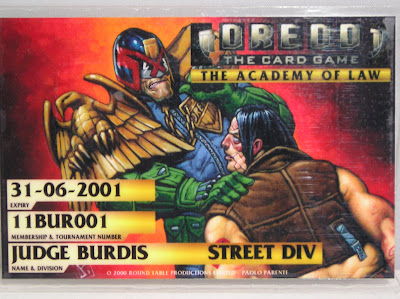 When you join the game, so as to play at the planned future tournaments you choose one of four Divisions to join Street, Psi, Tek or SJS, obviously I joined the Street Division!
Once chosen, you receive an ID Card and The Law Bulletin (a six issues a year news magazine), this is crammed with all the latest information, deck designs, rules updates, competition information and numerous other items. One year’s membership costs £15. Included in this membership was the special promo card ‘Best of the Best’. All in all four promo cards were released, the other three were placed on magazines and the likes, Prog 1144 had ‘Get Mean’ on the front cover.

Sadly this went the way of many a Dredd item, it didn’t sell and therefore it soon perished. The predicted expansion sets never got the chance to be made  and only two Law Bulletin's were released. Still I managed to have a letter published in issue two, something even the great Buttonman couldn’t manage ;-)

I have managed to get my hands on five artists proof cards, Judge McCall & Rico Dredd by Jock, Orlock & Vandalism by Colin MacNeil and Crimeblitz by Dom. On the back of Judge McCall and Crimeblitz the artist has drawn a sketch. Alos I have the pencils from the two Colin MacNeil cards, which are to be framed. Also from the set I have managed to obtain two painted cards Perilous Gantry by Dean Ormston and Exemplary Cadet Record by Colin MacNeil. Both of these are stunning cards and the colours on Colin’s card are amazing. Below are the cards, the two MacNeil pencils also show the actual playing cards, for comparison. I suppose I should have done the same for the painted two but time is against me as I am just finishing this piece off before I post it! 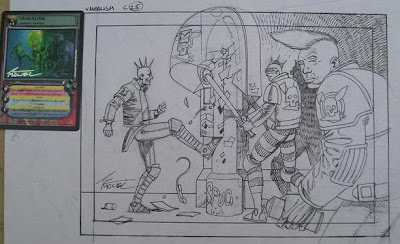 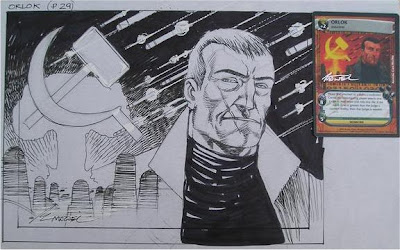 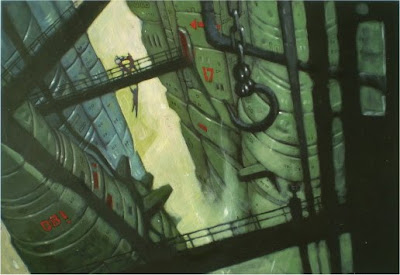 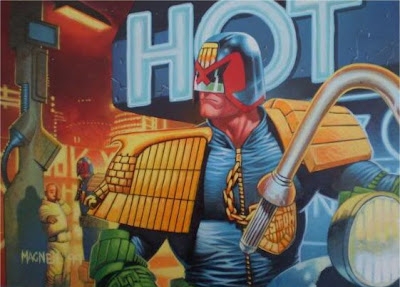 Two last things, I am currently in the process of trying to get as many cards signed as I can. At the moment I am 68/300, which isn’t too bad. Also, I have never managed to play this game, mainly due to the lack of Dredd and Gaming fans in Maidstone but also I suppose because they might get damaged, saying that I do have many multiples of most of the cards.
Posted by John