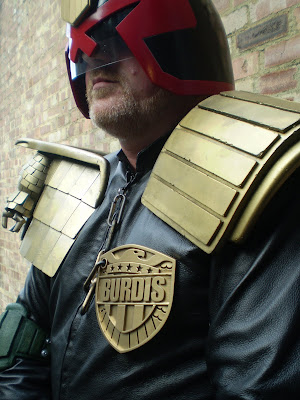 Look closely and you will see, no not the beard that annoys Dredd and my wife (she likes the look but not the feel). A 33 year wait is over and it was well worth the waiting. Just look at that badge everyone, it's a thing of supreme beauty, I can't begin to explain how happy I am.
You talk to any fan on the forums about what they would like to have merchandise wise, from Judge Dredd and apart from the 'nearly' impossible Judge uniform, they would all love to have a personalised Judge badge. Well folks, you may not know but I'm sure you all do, there is a short film in production at the moment. It's by director Steven Sterlacchini and it's called Judge Minty, the amazing uniforms and props used in this film have all been produced by the extremely talented Daniel Carey-George of Custom Creations.

Now I follow everything that appears online by this creative team, just so I can keep up to speed with what is happening. Did I ever tell anyone that I'm a versatile extra in this film, no! okay lets move on. 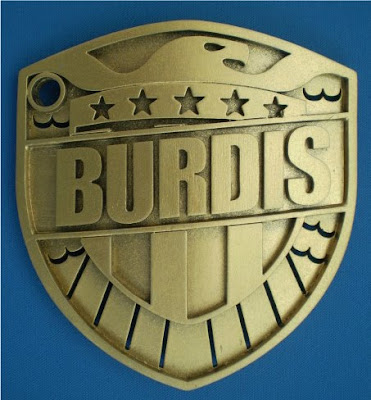 When I saw a badge with Steven's surname on appear in a post somewhere, I was straight in there to see if the dream would be possible. Let's just say when I turned up for the weekend shoot in London, just gone (10th/11th July 2010) I was an extremely happy person and thanked the team for being so kind. Now before you all start going I want, I want. This is a non profit fan film, so you can't all start pestering the team for badges as it's against the rules. Plus, why would you want a badge with my name on!

Just so Sam might one day get to wear one, I had two made (he never wore the Dredd pj's when he was the correct size, so it ain't looking good). Here they are side by side, there is no computer trickery as I am crap on the computer stuff, there actually are two badges side by side. 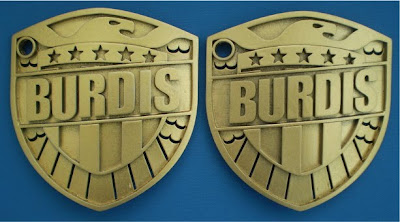 By the way, I better add the main man behind the camera is Stephen Green and his skills will make everyone look like the real thing!
Posted by John