Only a few short months ago I contacted Karl Richardson who's art can be seen gracing the cover of Prog 1783, to see if it was possible that he would do a commission for me. He was very happy to oblige and amazing as it may seem, this time no member of the Burdis family were to be included. I wanted a straight out action scene of Judge Dredd fighting Johnny Alpha! But I did say if you could fit the name Burdis into the background somewhere, whether it be a block, graffiti, sign, etc... it's up to your artistic flair

I then left Karl to come back with his initial idea and not long after this thumbnail arrived. Straight away I knew this was perfect and it was going to be all systems go, except for one minor detail. I loved the way the fight was positioned inbetween two sections of both Joe and Johnny's straining faces. It actually looks like someone has taken a picture mid fight as it seems that they are about to crash down onto the floor. As is the norm with me working nights, I have to look at these pics on my phone until I get home and believe me it's bloody torture! 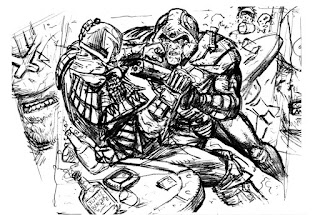 By the way can you see what minor detail would have caught my military eye.................................!!!
Anyway Karl said my sketches are really rough which made me laugh, as I thought it was highly detailed already and showed everything that needed to be shown.

The next picture was a neater pencil update of the action. As you can see the minor detail was still there, yes folks the knife. I pointed out to Karl that that wouldn't be the correct area that Joe would go for and Karl did say Dredds knife was originally in stronts forearm (as initially Dredds trying to incapacitate him, but I moved it at the last minute in photoshop - it should've been closer to stronts neck (target) to be honest, but Joes not as fast as Johnny in my book! Anyway I'm happy to remove the knife or move it closer to the neck (it would just show the fights been going a while, and quite desperate). What a disgrace saying Joe is slower than Johnny.

Now you can see more of the fine detail coming through and the looks on their faces are excellent. Also the detail on the bottles is starting to become a wee bit easier to see now! 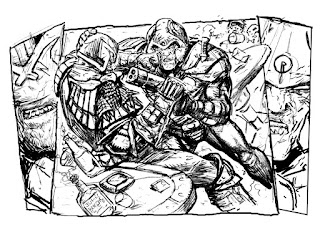 Next up was an even more detailed piece. The items on the table are becoming clearer and the background characters are fleshed out more. You can also see that the knife has changed angle, as if Dredd was sweeping his stroke in from the right. 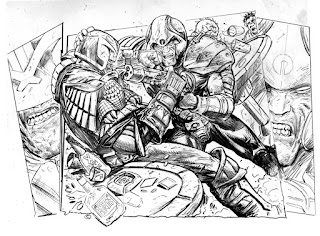 Next up shows the knife's removal. This was the final pic before the inking began as I was very happy with the whole look of the piece. Karl had included my name on a bottle and one of my old jobs on the other. Move over Pete Wells Block, I have BOOZE! 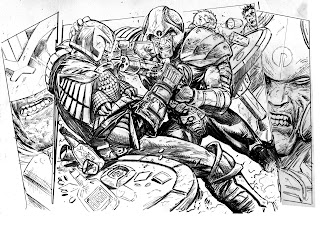 Here is the final picture all inked up. As is the norm with commissions, they always look better in the flesh as you can see the detail better than in a scan. Probably the worst part comes next, when you wait for the bugger to arrive. This is the killer as you want to see it in the flesh and then decide how to get it framed. 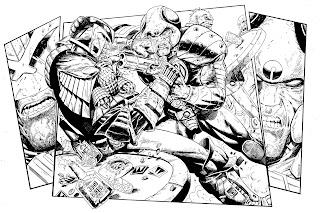 Now that you've seen how easy the process is to obtain such an item (well, for person paying that is) why don't you get in contact with Karl. Believe me, you won't be disappointed with the end result.
Now I know many of you will be thinking that commissions are way out of your price range, well why not contact Karl and see what he charges, as I feel you will then go ahead and become a very happy fan, just like me!

I shall leave the last words to Karl:-

The challenge with a Dredd/Stront brawl pic for me was to have it so it looked like they were really going at it without either character looking to have the upper hand. personally, I'm rooting for Stront all the way on this, but I know John's a big Dredd fan so I have to be careful! So I'm not even going to do the sketch where Johnny's blasting a (non fatal) hole in Dredd!

I was happy with my initial thumbnail, but had Dredd's face quite obscured by both shadow and his shoulder pad. If you're composing a picture with two combatants going at it in, the chances are, one will have his back to you or at least at an angle where the face isn't seen that clearly. You can 'stage' it to give them equal billing so to speak, but more often than not it doesnt look as natural and you can be taken out of the moment. a fight scene in a comic is much easier as you can have the characters sharing the limelight over a number of panels and pages. This gave me the idea to have a close up panel with Dredd looking grim and determined before the main pic. It looked a little lop-sided though so I had Stront on the other side balancing the composition. In the end I removed the shadow from dredds face, and at A3 size, he looked less obscured than he did in the thumbnail, so I probably didn't need to go down the comic panels route, but at the end of the day it gave the piece a different look and I'm glad I did it that way!
Posted by John