How to collect commissions, original artwork and sketches from 2000 AD artists. 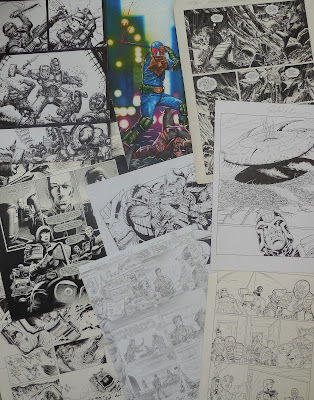 First off, you must remember that the 2000 AD artists are very approachable and many will be very happy to supply you with such items. Some can't do sketches or commissions anymore, due to failing eyesight and age, as the Prog has been around since 1977 but you may still be able to buy some of their original artwork.

One thing I must add, you don't always need to grab the following from known names. I've walked around the convention halls and seen particular styles that I liked from certain artists and had commissions from them. In the end, it's all down to what YOU like and not what you think you like, because everyone else does. Don't be a sheep, follow your instinct, as you never know, that unknown artist may be the next big thing!

Lets start with the staple of all comic conventions and the entry point into original artwork.

This happens primarily at Comic Conventions. The main ones being (at this moment) Thought Bubble - LSCC - NICE - ICE. You can contact certain artists to ask for a sketch if you don't attend the more comic style conventions. All you would have to do is explain all this in your introductory pm/email.
It's always best to carry your own sketch book and A4 is the best size (unless you are a cheeky git like me). Many fans have a few, as some like only Dredd in one sketch book and then in another they may have all the other characters from The House of Tharg.

It is always best to have some sort of blotting paper behind the page that you require the artist to draw upon, just in case he uses a felt tip pen/marker. This is what Clint Langley does and you don't want the ink to bleed through onto the next blank page. Prevention is better than cure!

There are two ways of collecting your sketches.

Firstly there is the well known path of wandering around the convention hall and seeing who is there (always best to look at the convention website before hand and decide on who you want. This saves a LOT of time!) All you have to do is walk up to the artist, introduce yourself and ask for a sketch of whatever you want. The price of these varies from FREE to £100+ depending on the artist but most are extremely good value. Many artists will have a price list on their table stating what you will pay for Headshot - Torso - Full Body - ETC... If not, just ask!
You may be added to a list of fellow fans, so don't always expect it to be done right then and if you are added to a list, then this gives you time to wander the con and get another sketch, or two.

The second way, is when an artist posts up on facebook that his pre-order sketch list for the next con is open. This way you can guarantee that you will get that sketch and you just walk up to the artist, introduce yourself and pick it up and pay for it. I have done this with a few artists and did it with Chris Weston at a LSCC. I picked up this bloody awesome Judge Dredd with a beaten Batman, as you do. 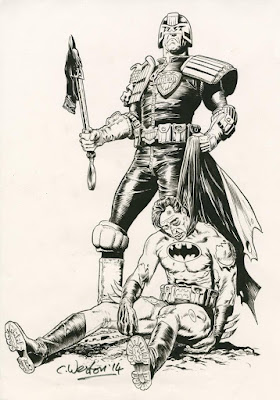 I have seen fans freeze with terror when stood near their favourite artists, when it's their turn to ask for a sketch. If you feel you may fall into this category, do not worry! Just approach a mate for a bit of encouragement and believe me the artist will understand, once you start chatting to him or her. Remember, they are human too and the last thing that they want at a convention is to watch people walk by and not come up to them.

The best part of the sketch process is actually seeing the sketch appear in front of you. I had Jock do a Dredd for me at a Dreddcon and for the first 30 seconds or so, I had no idea what he was doing, or what part was what. All of a sudden, within a few movements, it started to appear. All the time this is happening you are having a great chinwag and sometimes you get told about upcoming stuff, which is always exciting. Here's that Jock sketch! 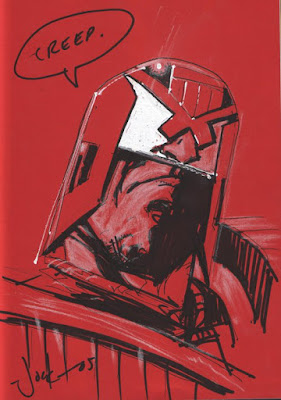 One thing! If you are told about upcoming stuff, remember, what is said at the con, stays at the con! You can chat about it but it shouldn't be put onto a forum, at least not until the story/strip has appeared in the Prog/Meg.

This has come over from the US, as many of their comics now come with variant blank covers, so you can get your favourite artists to do sketches on them. This makes them more personal. This you can have done at a con, or you can send the comic to them. Obviously, this is once you get to know them and you're not some crazed stalker!

With this you can have wraparound covers done or just the front, again, this is up to you. These can also be great fun, as this is basically you commissioning a cover. I have two types of covers on the go at the moment. First up I have Dredd artists working on the IDW Dredd blank covers and secondly, I have numerous Marvel & DC blank covers for any artist that I see in Artist Alley at conventions and with these I have them draw Dredd world characters beating up the characters from that comic. It's a bit of fun for me and the work by these artists is always top stuff.

Here are a few of those covers... 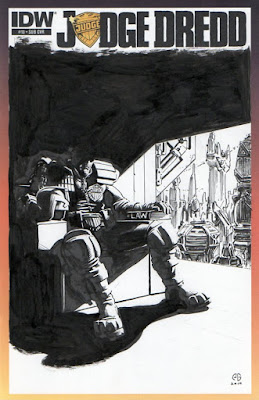 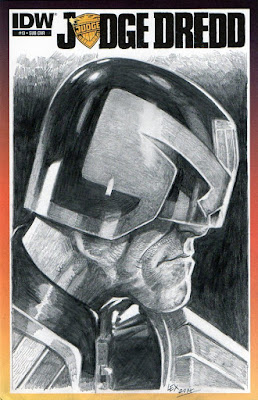 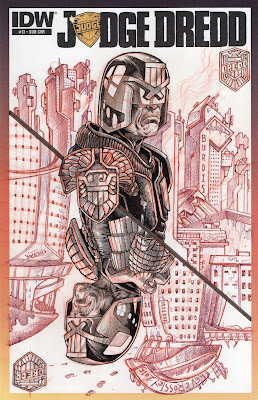 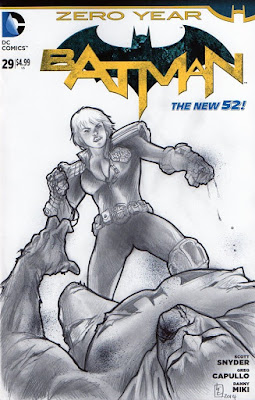 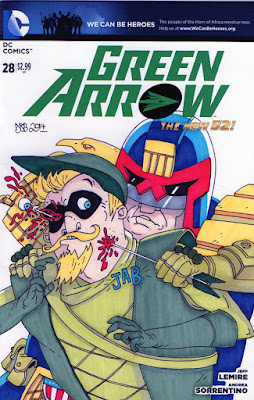 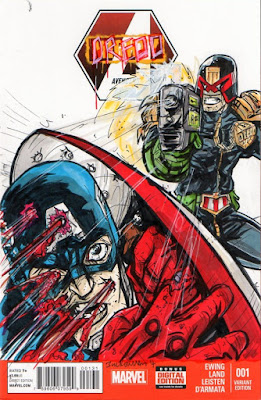 This is superb fun and not as expensive as many would think. Obviously it runs into the hundreds but not the thousands. Then again, that may depend on who you want to actually work for you (for that is what it is).

Price will also depend on the size and finish of the commission. Do you want inks, coloured or fully painted! Many artists have their prices online on their websites but equally, many others you will need to ask to find out. You may ask others who have had commissions for a rough idea as it's not the polite thing to post up peoples prices on forums and blogs, etc...

When you've decide who you want to do your commission and what size, the best part comes next, contacting them! Will they, won't they, as you have to remember, many of the artists are very busy and may not be able to fit you in for a long time. Don't become downhearted, as this is all part of the fun. I have had a piece take over a year to be finished and other collectors have waited a lot longer.

Once the artist has agreed to do something for you the really exciting stage begins, the ideas being thrown back and forth. This is hugely enjoyable, as this is when the artist throws ideas back at you that you might not have expected. You may have had an idea set in stone but when the artist mentions a picture that he has in mind and it blows you away, well that's why they're an artist, as they see things differently! They may even do a couple of thumbnail ideas (rough sketches of these ideas) for you to choose from.

Once you decide on the final picture, then you sit back and watch your email inbox, waiting for a glimpse of what is to come. Remember, you shouldn't expect to see this finished very quickly, they have to do their day job as well. Saying that, I have known artists do a commission rather quick but that is not the norm, perhaps they had an opening when the commission was put forward to them.

When the finished artwork arrives you will be amazed at how much detail you can see and then the torturous part happens. Sending it off to be framed. This can be relatively expensive, as you'll want to protect it from the sun and also it's gotta look good on the wall. When I go to the framers we have a long discussion on the mount or mounts, to try and catch certain colours on the page, if it's in colour! Anyway, that's for you to decide!

One last thing about commissions, remember you can have anything drawn, even famous covers redrawn for you. I like to include my family in some commissions, while Pete Wells enjoys having his name on buildings but especially the Blocks of Mega-City One, it's whatever you want!

Here are a few of my commissions, with links to show you how they came about.

Cliff Robinson - Basic idea, Dredd injured, my wife tending him and me saving the day, as you do. 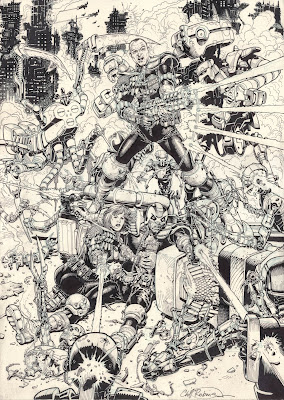 Colin MacNeil - This one involved a loads of mates who traveled up to the now defunct Hi-Ex! Comic Con in Inverness. 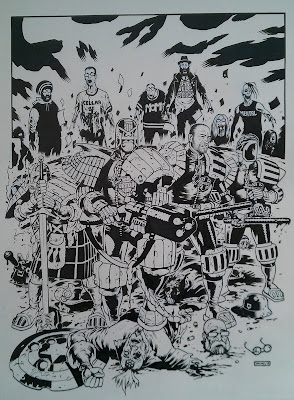 And finally, one from Karl Richardson and this was a nice and simple Dredd Vs Alpha 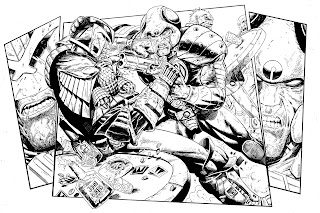 This is relatively easy to collect and can be very affordable to not quite so affordable!

The places to look at are ebay, art dealers, Comic Art Fans websites, Artists websites, Facebook, Twitter, etc.... With the advent of the internet, it has become a lot easier. Let us not forget, the convention halls themselves.

Many artists sell their own work now, mainly due to the ease of the internet. One such artist is Simon Davis, who is currently selling his Slaine work and it is all fully painted and extremely reasonable. You just contact such people on facebook and inquire.

The older pages very rarely pop up for sale, so keep your eyes open. The modern stuff is obviously easier and if you read the latest Prog or Meg and see a page that you like, contact the artist soon to see if it's available. It may not be, as it may have been drawn via the world of computer magic, which is the bane of collectors.

You can also join the popular facebook group 2000 AD Original Comic Artwork which is full of knowledgeable fans and artists and also quite a few sellers, so what are you waiting for!

Here are a few pages of original artwork that I have collected over the years. 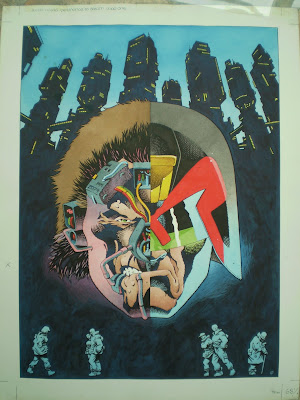 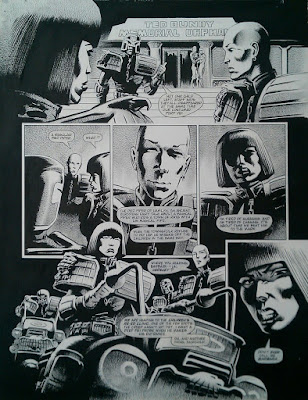 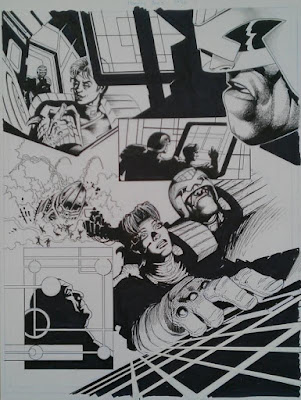 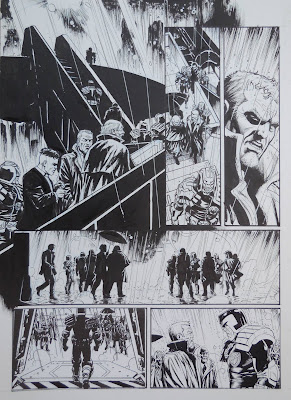 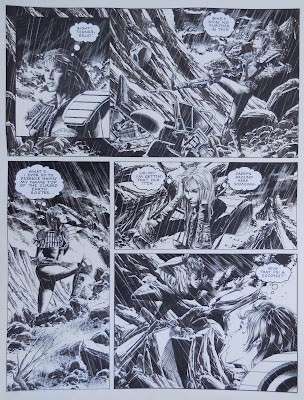 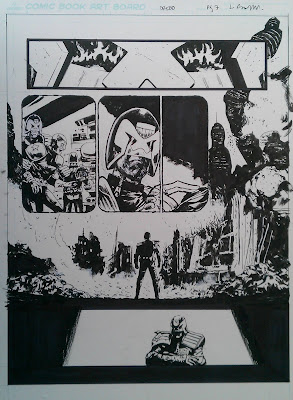 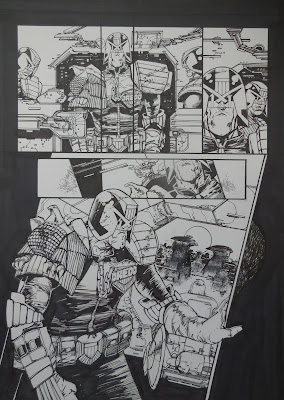 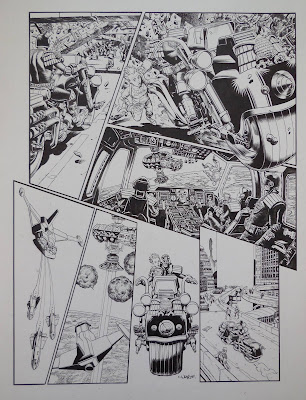 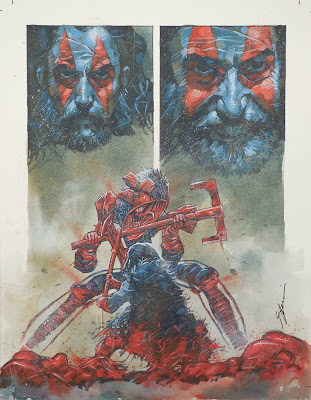 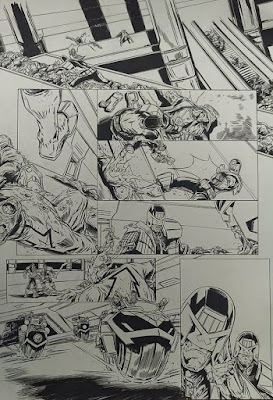 I hope that helps a few of you and if you have any questions then just ask away.

If I've left something out, just let me know and I'll add it, thanks!
Posted by John