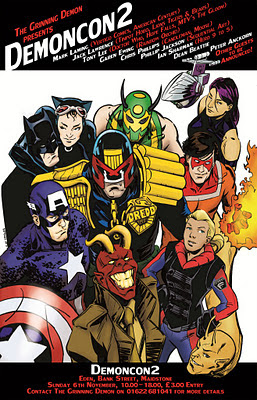 I'd been to the first one earlier in the year and thoroughly enjoyed myself and so had to be at this one as well (it would be rude not to, seeing as it takes 7 minutes from my front door to the con). It's not a big convention, in fact it's quite small really but don't let that put you off as the atmosphere is very friendly. Also a con this size gives you a chance to have some decent time with each creator in the room, something that would never happen at the massive cons!

I was there just after 10:00 and stayed till about 16:30 as I had a Sunday Dinner to get back for. Never turn down a meal that is cooked for you and that you don't have to wash up after, thanks Mother in Law!

Anyway, I did my normal thing, I wandered round and saw what was on offer and then started collecting my sketches. I always enjoy seeing everyone's take on all things Justice Department after I ask for a Dredd but this time I went for a few female Judges, as you will see later on. I also bought a few books but left that to near my departure time, so as not to have to carry them around with me, always plan ahead!

Meeting some old faces was great fun, especially the double hitting team of Chris Phillips and Phillip M Jackson. We had a good laugh about certain parts of their last sketches that they did at Demoncon 1, only slight mistakes but it all added to the fun of the art. I still have to get a commission from Chris but a big item that I will be buying up Thought Bubble has put that on the back burner for this year. Anyway here are the lads busy at work! 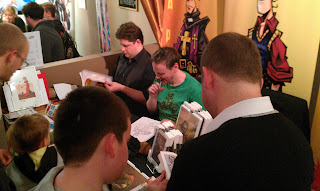 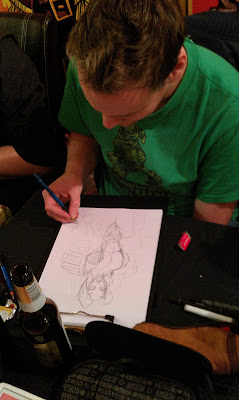 Their task was to draw Judge Hershey and Judge Anderson and out sex each other and boy they didn't let me down. 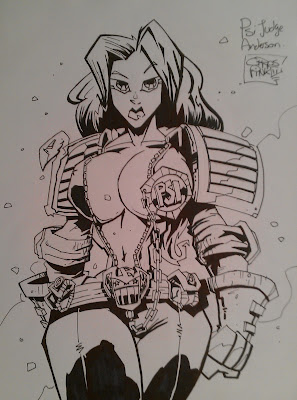 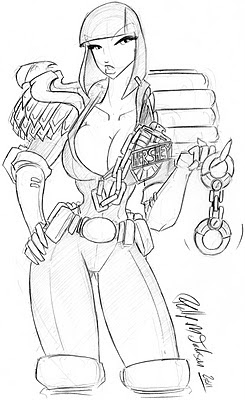 I also added a few more Candleman books to my growing collection. I've now read these and great fun they are on two levels. Firstly the adult level, you can really get into the character as he clumsily goes about his heroic deeds, like some insane cosplayer. Also due to the fact that he has no powers, it's interesting to see how the writer concludes each tale without him being killed off.
On the childrens level, the pages are full with vivid artwork and each story rattles along at a fair old pace. On the whole there is nothing in these that would upset any child who decided to read them. 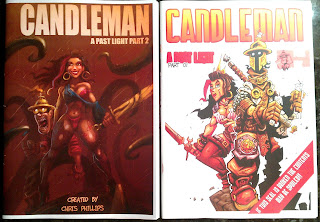 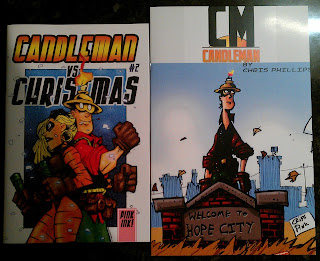 Next up was the Tony Lee and Dan Boultwood table.
I had a really interesting chat with Tony about Necrophim and Stalag #666 for 2000AD as I'd enjoyed both stories but prefered the former, mainly because I love an ending on a downer. 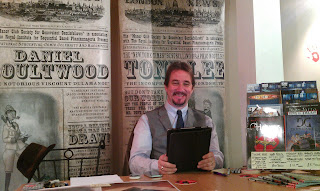 Dan was missing for this shot but I did manage to catch him eventually and he did the sketch below for me! 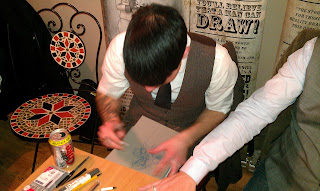 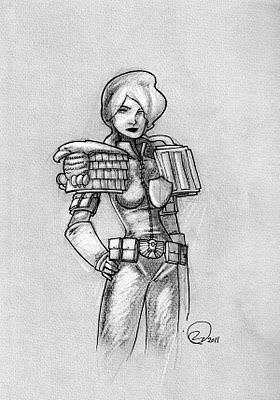 I also bought the TPB Harker by Tony and finished it last night and was mightily impressed at how he has continued the story. It's the only official sequel to Bram Stoker's 'Dracula' and everything is cannon. 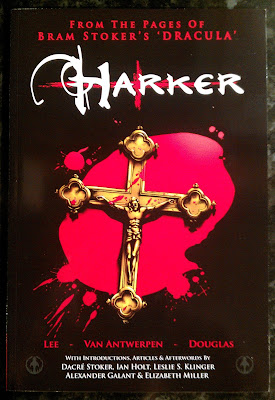 Next up was Marc Laming and I managed to obtain my favourite sketch of the day from him. I still have two more to be finished, more of that later but at the moment Marc is King! 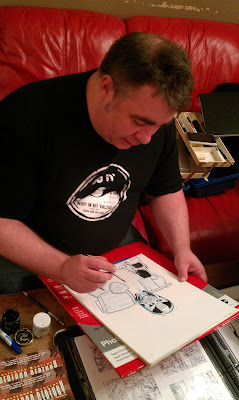 I had seen one of Marc's sketches inside the sketch pad of one of the son's of the organiser of the con and was impressed. I found Marc at the rear of the con and asked for a Dredd in the rain and every so often I would pop back to him and have a chat as he took ages doing this beauty.
He mentioned that he did a strip for the Revolver Romance Special, so I'll have to get that up from the cellar and check it out sometime soon. He aslo had some pages from a Korea War story that he was doing and the detail was amazing, I couldn't pick him up on anything and look forward to seeing this when it's finished.
Judge Dredd by Marc Laming 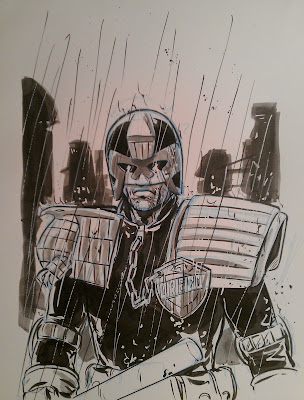 Next up was Grant Perkins and his delightful wife. 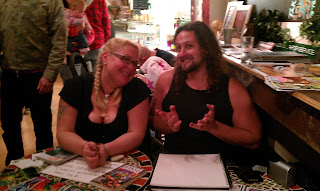 I was looking at his art with a mate and his son who are both into wrestling and commented on how much his style looked like a piece I had seen on the 2000AD forum (the massive wrestling poster). He then showed me a pic on his phone and it was that poster and he was that artist. It's always great to see another forum member in the flesh and a highly talented one at that.
He showed me the artwork he had done for the subscription copy of Future Shocks for 2000 AD and pointed out the small difference. They replaced Devlin Waugh with Mongrol in the painting on the wall.
Future Shocks by Grant Perkins 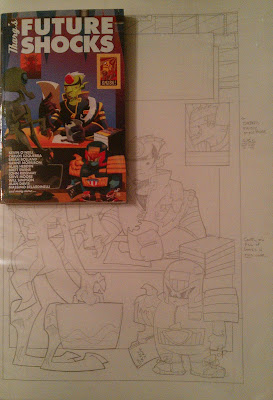 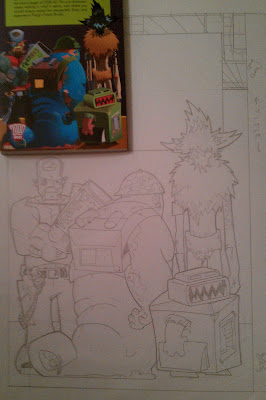 I then asked him to do a Dredd and include my blog title and he didn't disappoint. I love the way the fist is punching into the foreground.
Judge Dredd by Grant Perkins 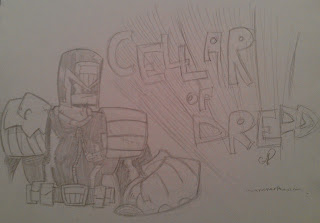 ﻿
Up next it was a visit to Ian Sharman's table and we had a chat about what I should buy from his stock, especially as I've bought most of his stuff now, We settled on FTL in the end and I shall read it over the coming days. One thing I've just realised is that I didn't get a sketch from his sidekick David Wynne, I'll correct that next time. 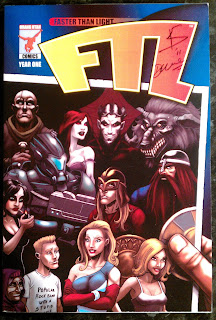 I also went out of my way to make sure I obtained two sketches from two girls who flew the flag for Manga art at the con, Sonia Leong and Morag Lewis. 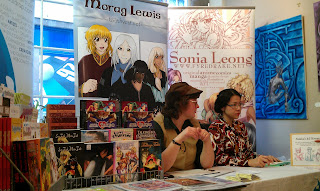 At the moment I have only one sketch with me (Morag's), the reason is as follows! I had also asked Jack Lawrence and Dean Beattie for a sketch each and left my sketch pad (containing Sonia's Dredd) with Dean, as he wanted to take his time on the sketch he was going to do. Jack's sketch won't appear on here as well just yet, as he's doing his sketch at home as well, I love these dedicated  artists.
Judge Dredd by Morag Lewis 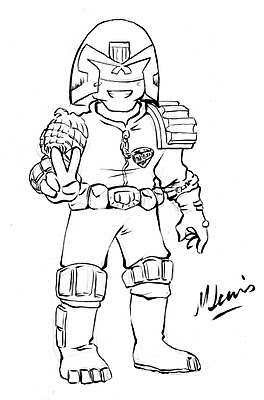 Next up was a visit to the Cancer Town table and I had a few chats with Cy Dethan, Nic Wilkinson and Peter Mason. They mentioned Ricmond and Vicky (the Hi-Ex! promoters) as they had worked with them before and so we chatted about Hi-Ex. I also managed to include a push for Peter to get in touch with the FutureQuake team and show them some of his stuff. The three of them are in the middle of the photo below, behind Jack Lawrence. 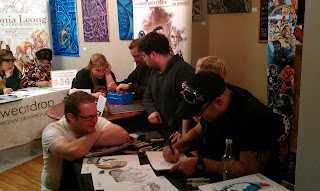 Anyway I asked them to do the hard sell on their books and after a great effort, I opted for Cancer Town. Good job I bought it, as they quickly sold out of this! 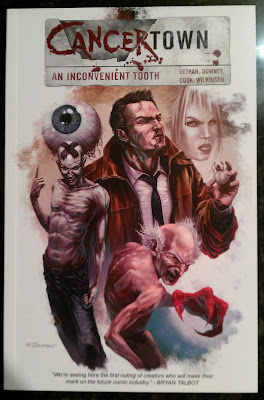 Luckily for me, Peter gave me a couple of his prints as well. 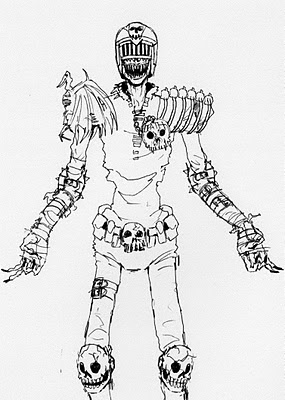 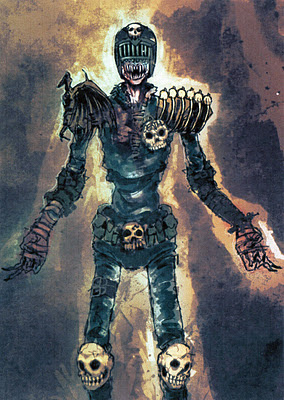 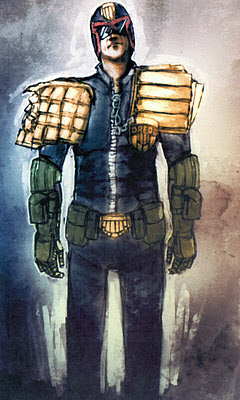 Next up was the extremely friendly Jack Lawrence, half obscured by his own artwork as he sorts out some amazing pages for some fans, just out of shot! 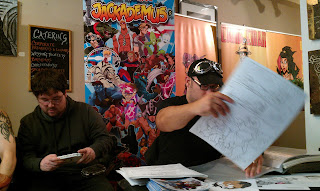 I asked for one of the female Judges from Jack but I can't remember who and obviously due to the fact he is doing that sketch at home, I have nothing to show you yet but I will when I collect it in the near future! I had a great laugh with Jack and managed to buy a page from his story that appeared in the Megazine, Field Trip. I chose this page due to the female Judge on show and the head shots.
Field Trip by Jack Lawrence 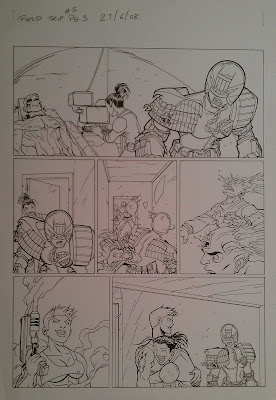 All in all another productive sketch collecting day for me, with many a laugh thrown in for good measure. Obviously the 3 missing sketches will be added once they are in my possession and then you will see how Sonia has drawn Dredd. Never really knew that you have to always show the eyes in Manga!
This is definately a fun con and many thanks go to Graham who runs The Grinning Demon comic emporium in Maidstone for putting the show on. With it moving to a larger location for the next one more things can be included and obviously more guests.
Posted by John