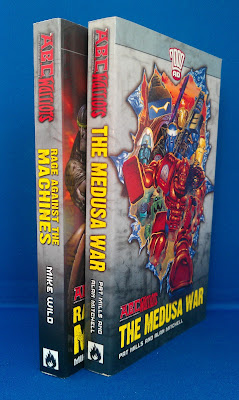 These two books are taken from the long running comic series created by Pat Mills and have been superbly transferred to this medium. The first novel is a collaboration between Pat & Alan Mitchell, while the second is by Mike Wild.
The ABC Warriors - hard-drinking robotic soldiers designed for combat in the worst Atomic, Bacterial and Chemical theatres of war. They are a tough fighting force that has slipped into legend. led by the fearless Sergeant Hammerstein, the elite unit of warriors carry out thye worst suicide missions available. 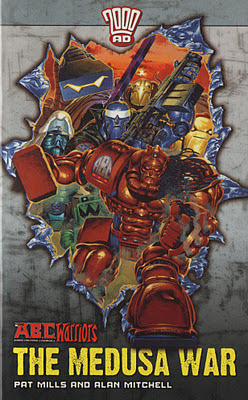 Story by
Pat Mills & Alan Mitchell
Cover by
Kev Walker
'On the dead plains of Mars, human terraformers awake an ancient life-force known as Medusa that is determined to stop the planet becoming an alien world. When the ABC Warriors learn of this new threat, a two thousand year-old programme is activated that compels them to return to the red planet, but in doing so they know that they will be rendered obsolete and self-destruct. Facing a guarenteed suicide mission, the ABC Warriors lock and load and begin the Medus War!' 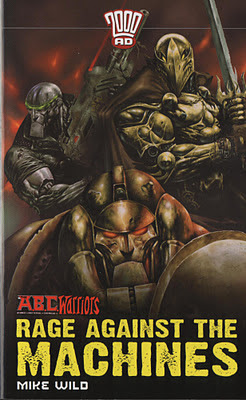 Story by
Mike Wild
Cover by
Karl Richardson
'When the tide of war turns against them on the Martian battlefield and all hope of victory slips away, the ABC Warriors are forced to disband their unit. They must go seperate ways in a final, desperate attempt to save mankind from the alien terror.'
﻿
Again with having some favourite characters appear in prose helps expand the story. We all know what they look like, so we can visualise the goings on with ease, as both books take us deeper into the war on Mars.
I read these as soon as they came out and I now feel as though I should dust them both off and endulge myself again! Something I never do with books but I might actually have a 2000AD marathon session.
Posted by John