Well, what a weekend that was, so much crammed into so little time. I'm still on a high now a week later as I type this.
It all started for me on the Thursday evening when I set off from Maidstone at 17:00 to pick Gavin Leahy (who was flying in from Dublin) and Peter Wolf (who came up from Brighton) up. Next it was on to Milton Keynes for James Werndly and then across to the Premier Inn on the A1/A14 junction for Matthew McLaughlin. Now it was straight up the M6 for Phil Lloyd in the heart of Manchester and the last pick up for the man who won the Weakest Link, Stephen Watson in the back waters of Paisley. Once all were on board we continued up the road to our final destination, Inverness! We arrived around 08:30ish, so as you can see it truly was a Hell-Trek, 15 & 1/2 hours in total and I drove all the way. On arrival Mike Carroll greeted us as we parked the Radwagon and we all told him of our journey before we wandered to reception.

Now it was time to book in (couldn't do that until 14:00), get some grub, see some sights and finally relax before the evenings drinking in the Ramada bar. After a quick shower myself and Stephen took the express elevator down to the drinking zone. We didn't manage to grab an evening meal but that was forgotten about once the drink started to flow. On entering the bar Mike Carroll pointed out where everyone was. We managed to sit next to John Higgins and around the table were Simon Fraser, Charlie Adlard, Gary Erskine amongst others. Eventually all the Hell-Trekkers turned up and many stories were told as the drinks loosened everyones lips. I'm sure you'll all want to know what was said, well remember this, What is said in the Ramada bar stays in the Ramada bar! 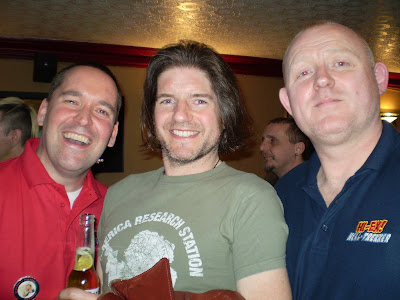 Come the end of the night at around 03:00 and after the bar had been drunk dry I was sat in the lounge/reception with Stephen, Al Ewing and Ian Sharman and we ended up listening to obsure 80's songs through my phone, on youtube! Then bed called and not before time, I can tell you.

At last we were off to the con, we traipsed over to the Eden Court which was a perfect venue for such an event. You would have thought it had been purpose built to hold the con, that's how well it catered for all the events that transpired over the weekend. While in the queue, hero killer himself Colin MacNeil was having a quick smoke outside, so still having 10 minutes to spare I popped outside to have a quick chat and let him know that we had all made it. Colin is the resident special guest in the Rowdy Yates Block Citizens Yap Shop every Wednesday night. Out of the corner of my eye I saw the queue move so I made my excuses and rejoined the lads.

Once in the One Touch Theatre it was time to chat to all the creators and members of the 2000AD forum before gathering a few sketches. I also went into the auction with Pete Wells and proceeded to inflict a 'Shock and Awe' technique on all rival bidders to kill them off. Lets just say it worked rather well and I won the following four pieces.

After that it was time to buy a few pages of art and ask for a few sketches. I managed to find a beautifully painted piece on Colin's table which was from the Dredd card game from years back so I decided to buy that (it's now being framed) as the colours are so vibrant. 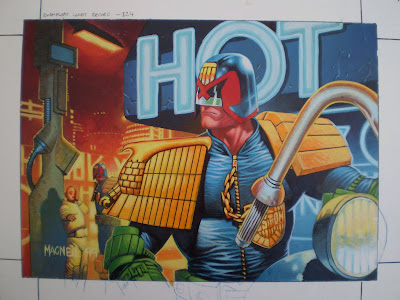 I then wandered about having a chat with many a creator and fan alike. So many things said, so little space to write it down, suffice to say you need to go next year! During this time I picked up the Dante page that I had bought from Simon Fraser (I asked if he could hold it until after the auction, so as not to damage it). I was after a Dredd page but when I saw this page I just had to buy it. The rain pouring down over the two protagonists, mingling in with their tears and the superb expressions just called out to me. 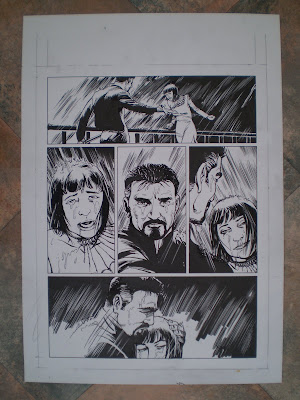 It soon hit 18:00 and now it was time to get back to the hotel, shower and get our arses over to the Chinese meal and let me tell you I was starving by then. Rich and Vicky had booked 60 seats for guests and they soon all filled up. The Hell-Trekkers sat with Pete Wells, Kev F.Sutherland, Kenneth Philip Reid, Michel Rodrigue and his wife. They haven't yet arrived as this picture was taken! 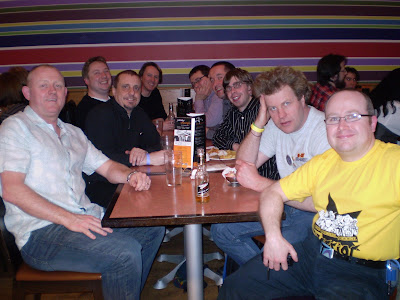 Once the meal was wolfed down it was off to a pub over the river for a quick shandy before the lure of the Ramada drew us back. As I was driving the next night I decided on coke so as to get a decent sleep, this in turn let me really remember all the stories that were told. Remember folks, 'what is said in the Ramada, stays in the Ramada', sorry! Still many stories were told and the infamous 'comic jam' happened. This is when pages are passed round a table and everyone adds a panel to each depraved story, for that is what they all seemed to become. Many photos were taken of bleary eyed people during the evening and I have the proof but seeing as I wanted an early sleep that night I decided to go up to the room and leave the bar rocking, well it was 04:00, I know and the clocks went forward! 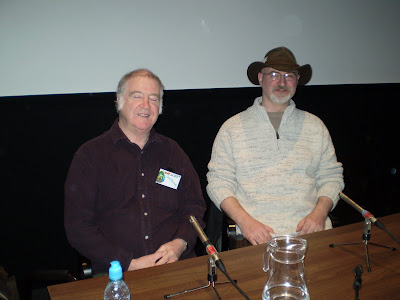 The same day I awoke and prepared the Radwagon for the journey back. We drove over to the venue and backed the vehicle up against a load of bushes, so as to stop anyone getting in the back. Today I wanted to watch the Cam Kennedy interview and the 2000AD panel so I decided to just get as many sketches in during the day.

I also managed to grab Cam Kennedy for a good 10 minutes before his interview and I must say, what a gent! Obviously, next up was the Cam Kennedy interview by Colin (I’m not here yet) MacNeil. This was excellent, full of very funny stories about his life and work with a small bit of Q&A thrown in. I asked which characters did he NOT like drawing but he had to, due to the job. His answer was the Star Wars stuff (very funny story) mainly because he was sick of drawing the same thing over and over again. He loved 2000AD because he could draw a car one week, destroy it and the next week draw a completely different car, and destroy it again. He also doesn’t like drawing horses!

After this I quickly grabbed up and coming artist Kevin Levell who I predict will be in 2000AD soon due to his very fine and polished work. He started drawing a Fink for me and I said I'll be back in a second as I wanted to grab a few photo's of the hall. The next thing I knew, I was sat down filming the 2000AD panel. Once that had finished I made my way back to Kev and apologised as I always like to chat to the artist as their work appears on the page. I still feel terrible about it now. Kev said he wasn't happy with his work and said to get in contact so he can do another piece for me. I'm quite happy with the Fink and wouldn't want to badger him so I'll leave it at that.

Now it was time for everyone to say goodbye but not before the Hell-Trekkers had thanked me for organising the actual Hell-Trek. They had mentioned this to Colin and he donated some unique uncut proofs of 'America' and when the lads and Colin handed them over I was quite emotional about it. I did thank them as manly as I could but I did have some tears welling up. 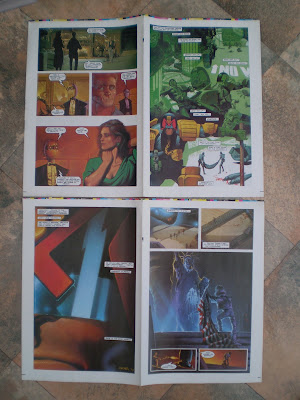 That was it then, the end of Hi-Ex! 3, we finished off thanking everyone, especially Rich and Vicky for putting together the best comic convention I have ever been to and I'm sure that goes for the rest of everyone who went. After that we all climbed in the Radwagon and began the long Hell'ish Trek back down the countries.
What did I get out of the weekend, lets see...
I met six other members of the 2000AD forum and became good friends with them all as we experienced our very own road movie. I also met many other forumites up Inverness and put faces to names. I had great fun with all the creators. I could just go on and on but above all, I have been to the Galaxy's Greatest Convention. Well run, excellently laid out, friendly atmosphere, superb guests, amazing hosts and the convention didn't end when the halls shut each day, oh! no, it continued late on into the night (and the next morning).
I highly recommend that all fans should get to this event in the future as it is the 'Eight Wonder of the World'
By the way here is a pic of all the 2000AD forum fans, 2000AD creators and our hosts Rich & Vicky. A few people are missing due to not being in the picture! 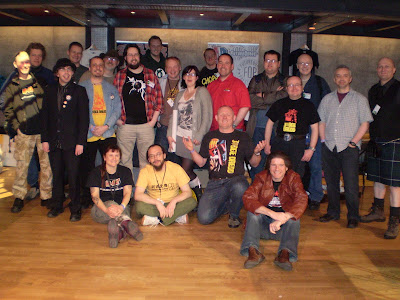