Commission by PJ Holden for this Blog

What a crap header I've had on this blog, just coloured writing on a black background, how boring! The problem is what to do about it. Earlier in the week, after seeing Pete Wells commission on the 2000AD forum I decided to get a commission done myself.

I contacted PJ Holden and gave him the briefest of instructions about what I wanted. It had to have Dredd, me and the name of the blog in the picture. Also, if possible, could the name be in a position where it could be cropped off so as to be used as the header on the blog (as you can see I decided on the whole picture in the end, as it's that good).

Later that day he got back to me with his initial idea and I was extremely impressed. Not only had he incorporated all that I asked into the picture but it was a story in itself! 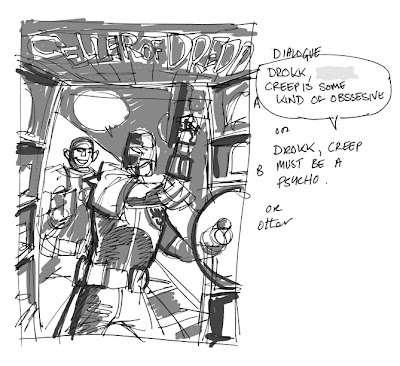 I gave the go ahead to continue with this idea and in the same day the next stage of the picture appeared. 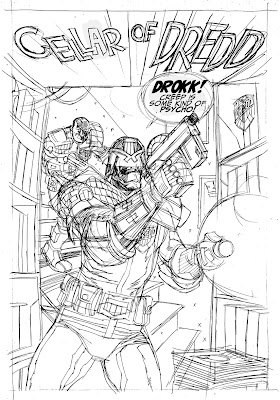 Next up was the finished piece where PJ added all the little extras, like the Judge Dredd Case Files, a pile of 2000AD's, a helmet, model, etc... All these add to the enjoyment of the picture, especially as my cellar really is like this.

Also he cropped off the top, as I asked earlier in the brief (before he had even begun) so that I could use that as the blog logo but I'm gonna stick with the picture itself, as it tells it as it is!

Now if you want to see a couple of extra pictures, then pop along to PJ's blog, where he writes about this commission, incuding some arty talk. In fact while you are there get yourself a commission, as you won't regret it. At the moment I'm just waiting for this to arrive and when it does it will be framed but not until I've had a bloody good look at it!
Posted by John