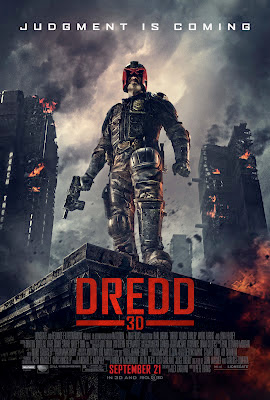 At last we have the DREDD film that all the fans have been waiting 35 years for. If you don't know much about the character, then don't worry! You don't need a long winded origins story to bring you up to speed, as Karl gives a voice over to the opening shots that tells you all you need to know. Once he's finished it's time for 90 plus minutes of action.

Urban nails old stoney face perfectly, his mannerisms, his voice and his general bearing. When he talks it's in a way so that people listen. Why waste fifty words when five will do to get your point across and he doesn't need to shout to hammer the point home. He handles the action sequences like a pro and his weapon drills are spot on, along with his precise unarmed combat skills. What you see is believable and a joy to watch as he goes about his job! 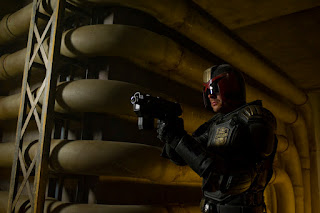 Thirlby brings Anderson to life with a superb display of empathy and controlled aggression, as she has to prove in these 24 hours that she has the determination and skills to be a Judge in Mega-City One! She goes about this even when she feels and sees the consequences of her actions at certain stages through the film and sometimes it can be quite heartbreaking for her!

Headey plays a brilliantly villain as Ma Ma. Brought up in the slums and decides that she needs to be Top Dog and takes to that role easily. There's none of that insane crime boss stuff here. Understated is how I would best describe her and at some stages you could actually feel sorry for her! Could I describe her as a victim, that's for Dredd to decide!

As for the action sequences, I thoroughly enjoyed them and couldn't pick any faults. The training that Karl and Olivia have done shows on the screen, as they never put a foot wrong as they progress through the film. They are brutal, methodical and clinical in their pursuit of bringing Ma Ma to justice! 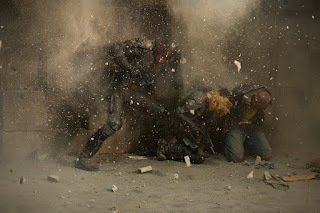 The Slo Mo is cleverly shot and even when you are watching horrendous round impacts on flesh, or glass shatter it brings a vivid beauty to the eye and you forget about the carnage you are witnessing but rather pick up on the tranquillity of it all! Think the Discovery Channel but up a few notches!

Alex Garland has brought a Dredd to the screen that is just what the fans have wanted and his script is lean, never lets up and is right to the core of the character. What you get on screen is what the fans have been reading in 2000 AD for 35 years. Also, one amazing nod to many of the writers, artists and fans is that Alex has crammed names in places throughout the film and it is a pleasure to catch a glimpse of names you know but obviously this only works if you know them in the first place!

At last John Wagner and Carlos Ezquerra have a film that does 'justice' to their creation!

To me this is the best adaption of a comic book character since Christopher Reeve was and always will be, Superman!
Posted by John