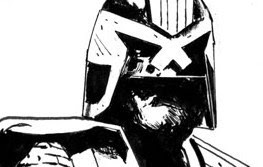 By now you will have all bought your Prog 1799 and will have read the final part of this strip. If not, do not worry as there are no pics from part two in this article!

This is all about how Laurence Campbell decided to draw this strip and very interesting it is indeed and don't forget to have a look at his blog here!

The seed for this interesting idea was sown at Demoncon3, where I was on patrol as Senior Street Judge Burdis! Laurence saw me a few times breaking heads, drokk! I even Judged him at one stage. He also did an excellent Dredd head for my A2 page of 'Dredd Heads' and I also bought a page of original art from him. 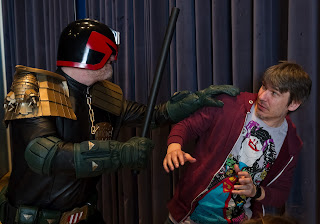 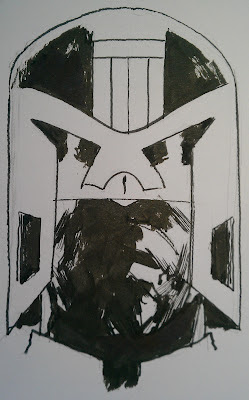 The Dredd head by Laurence joins some illustrious company 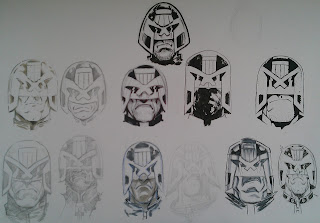 A DeMarco page pecilled by Laurence and Inked by Dylan Teague 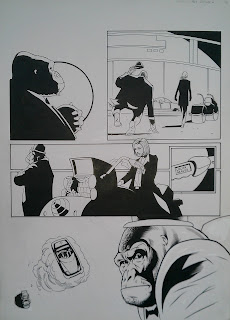 Anyway, a few months had passed and the Mighty Tharg had decreed that it was time for Laurence to enhance the prog with his dramatic and stylish artwork again, on none other than a DREDD tale! This was to be written by Rob Williams and be set after the 'Day of Chaos' storyline, which nigh on destroyed Mega-City One! This got Laurence to thinking about when I was wearing my uniform and he asked me if he could take some reference shots of me dressed as a judge. In return he would let me have some of the art from the strip. How on earth could I refuse such an offer!

Due to us both attending the convention in Maidstone it was obvious that we lived within a reasonable distance of each other. Then again, when has distance ever got in my way for a bit of Dredd! We sorted a day out for me to come over and so one Saturday morning, straight after work (I did shower) I drove across to Laurence's house.
He showed me his prelims of the strip and it looked excellent, it really had the feel of how the Wagner storyline had left the city and the Judges. Just looking at this showed me how well his finished strip would look in the prog. Now was the time to get into character and don the uniform.
Laurence wanted me to act out certain panels and poses and do it under different lighting, so that he could compare what it looks like in real life to what his artistic eye picks up when he draws a strip. As a reader and fan of Dredd, I found this fascinating and it opened my eyes up to why artists draw figures in certain ways. One of the main things I learnt from Laurence, was the Lawgiver placement for when firing towards the reader and I now use this stance when being photographed at conventions. I would always place it in front of my face in line of fire towards the target but Laurence wanted me to place it slightly to the side, so that my face was not obscured. I'm sure all you artists know this but it was all new to me!
The time flew by and everything Laurence envisioned was done and so it was time to depart. All I had to do now was wait till the story was about to appear in the prog (which as you all know now, it has). I contacted Laurence over the summer, as I would be in his area during that time with the family and so organised a day to choose my pages. To say this was hard was an understatement, it took me DROKKIN' AGES! Every page had something on that I really loved and I could see little bits of me in certain panels. Laurence had said that I could pick two pages from each part. I knew that these pages were in demand, as I had seen a few people enquire about this upcoming strip on his facebook page. By the way, If you want any of the pages, then they will be in GOSH and for sale through them, so best contact them quickly here!
Here are two pages for you to look at from part one, these include the rough layouts as well.
Page 3 Roughs 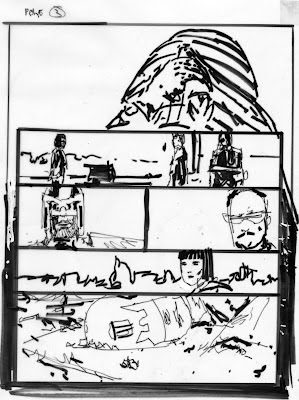 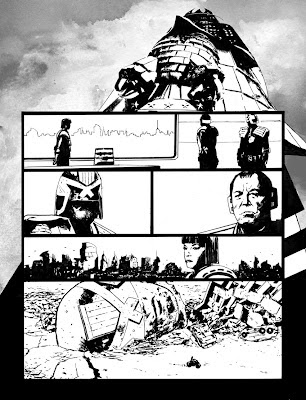 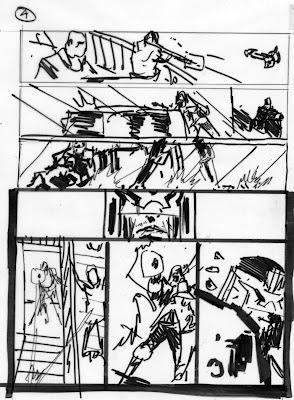 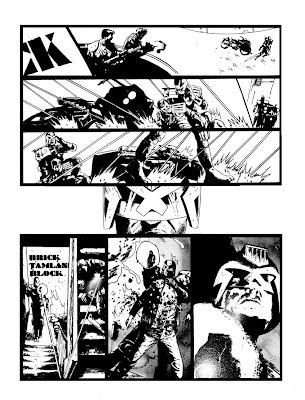 I wonder how many of you could see me, if at all! My wife recognised my stance in some of the pics which was a relief!
As I said this was a very enjoyable experience and has helped me see artwork and how it progresses in a new light and I can't thank Laurence enough for that!
Posted by John