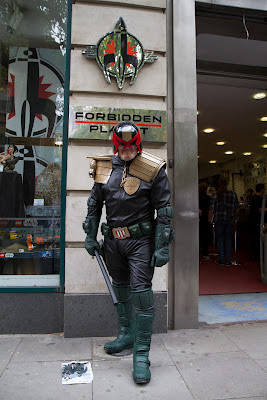 Saturday 1st September was the day that 2000 AD held its very first national signing event for all their fans. This was held at Forbidden Planet and Travelling Man at the following locations - London, Bristol, Manchester, Birmingham, Leeds, Belfast and Edinburgh. Numerous droids from the House of Tharg would be in attendance. Obviously London was gonna have the biggest droid count, it's just the way the world works!

A few fans from the 2000AD on line community got together and organised a meet at the London event!

I had been approached a few weeks earlier by Danie Ware, to see if I would be the resident Judge for the event and I accepted straight away. This was going to be a great day and it meant that I could patrol some of London's streets afterwards.

After another nights work I quickly showered and set off to the big city on the train, towing my uniform in it's boxes. When I arrived I decided to pop along to the Empire cinema in Leicester Square and see the manager. Long story short, I asked her if they were doing anything for DREDD, she replied not really. I showed her some pics of me as Judge Burdis and said that I'd be up for anything to help out. She was up for it and I'd said I'll be down later in uniform and we can chat more.

I continued onwards to Forbidden Planet and introduced myself and I must thank all the staff, especially Jon Harrison as he let me have the run of the place and get on with dispensing justice to everyone. I did a recce of the place, so I knew where the toilets were and changed into uniform. When I was doing this some of the new Dredd posters (where he's stood on the building) turned up and I asked for a couple of these massive brutes (they are safe in the cellar now).

It was time to JUDGE the store and await the droids. 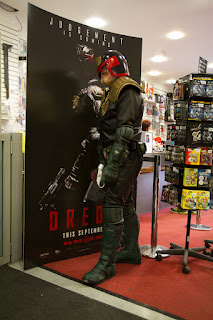 It's always nice to see the expressions on peoples faces when I sneak up wearing the uniform, as quite a few issue an expletive from the shock of it but many of the children's reactions are priceless. I had some cry, I stopped one cry but most enjoy it and want their pictures taken. Some parents want the children to be pictured with me more than the child actually does. Some ladies want to be pictured with me to show their other halves, as they are big fans. The reasons are varied but they all love the Law!


Art droid Ben Willsher needs to be escorted into the building! 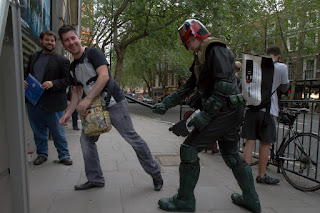 The 2000 AD droids assemble with their officially sanctioned protection! 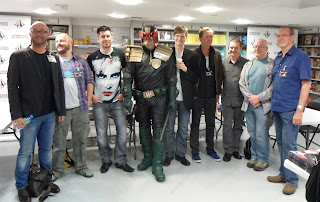 Thargs droids turned up and numerous forum members were on hand to grab sketches, goodies, signatures and have a good old chat, along with so many other people that the signing went on for an extra two hours easily! Poor Boo Cook was the last droid sitting, demand is hard sometimes and his sketches were equally as good at the end as they were at the begining, what a star!


Keeping the fans in check! 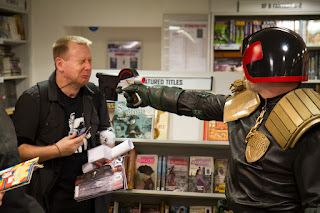 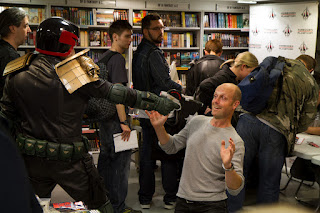 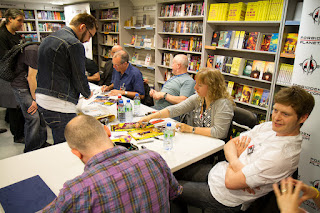 I notice Boo is under pressure due to being in demand! 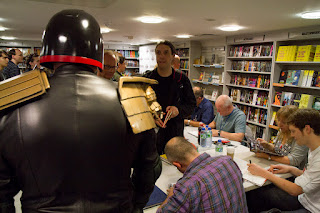 So I gently encourage him to speed up! 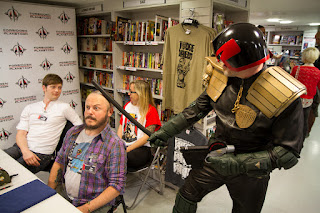 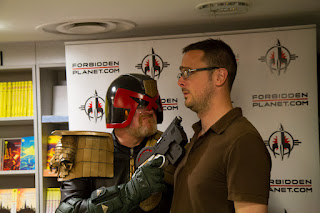 During the signing I wandered around the droids, beat people up and also patrolled the whole store. Every so often I would wander outside for a bit of air and entice people in. During one of these periods a police car signalled that they were going to do a U-turn and park alongside.
Two armed police climbed out (I had informed the police via 101 what I was going to do) and asked about the film, it seems all the police I talked to are going to see it. They then wanted a photo and another cop appeared from the rear of the car and obliged. I asked if they wanted me to draw my Lawgiver and they replied "best not!"
Just before they left, they did say that they would love to patrol wearing the helmet. Sadly no-one saw this happen but through the magic of twitter, Steve Green found this one photo! 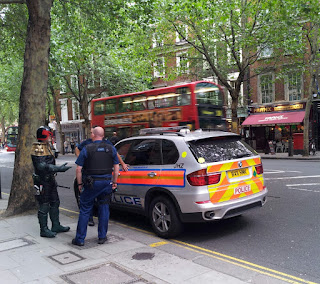 Escorting some eldsters down the street! 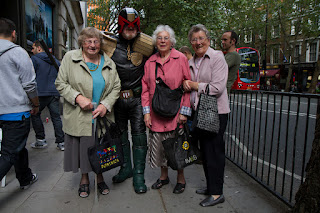 Look at those DROKKIN' spines! 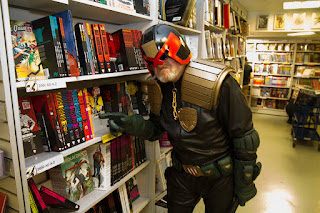 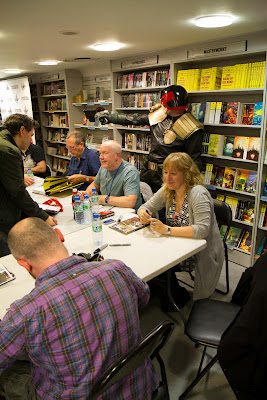 After it was finished I went across to the Crown and Anchor in Neal Street, this is the Southern Contingent's pub of choice. The funny thing is not many people batted an eyelid. One lad asked about the film as we left and we gave all the relevant info and told him and his mates it was excellent. This happened throughout my patrol. 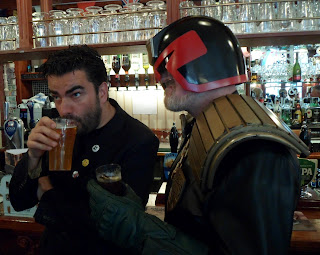 I then wandered into Leicester Square where a couple of police were stood watching the crowds, we had the obligatory photo and they wanted one also. 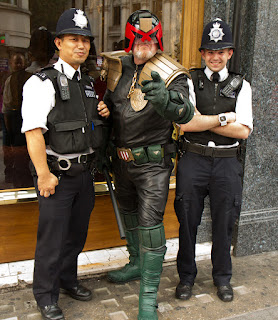 Next up was the Empire cinema and I caught the manager before she finished and let's hope something can be arranged this weekend. I did like some of the ideas that she initially had but again, let us wait and see what happens!

We left and did a bit of a photo shoot outside the cinema with the Dredd poster in the background. As Steve and Tony took these pics, I noticed the amount of people gatheringing round taking more pics. This can only be good for the film if it gets people talking about it! 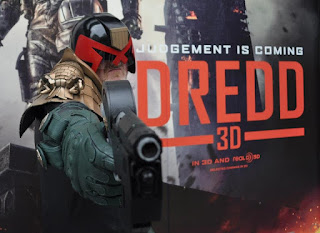 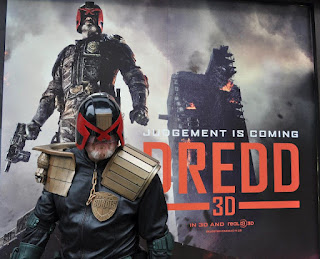 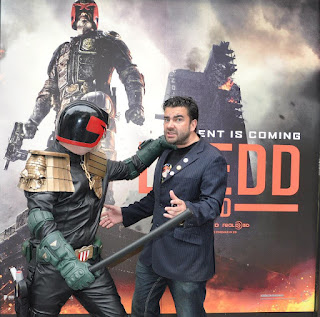 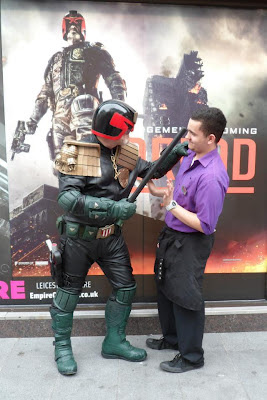 What are you doing citizen, that's Judge assault! 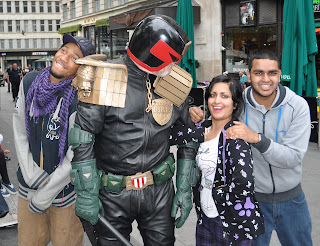 We finished of in the square and headed off to Trafalgar Square and then Covent Garden for some more fun. 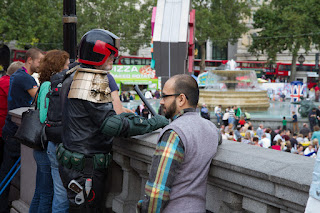 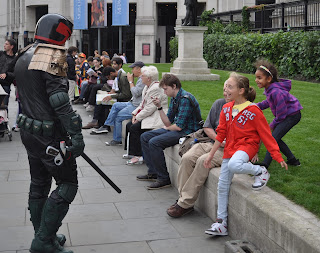 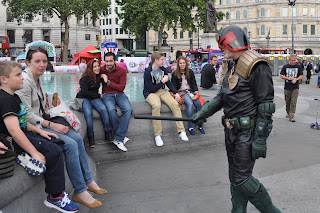 After this it was back to Forbidden Planet to get changed and collect my goodies, what a day!

When I arrived home I was physically exhausted. I think this weeks screening of Dredd, work and today finally caught up with me. I showered, did a bit on the computer and then fell asleep bolt upright on the settee, with remote in hand, which is how my wife found me at 06:30 on Sunday morning!

Just a couple more pics to show you that I did meet a couple of so called superheroes! 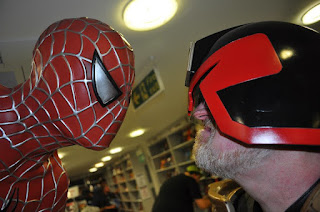 Finally a very BIG thank you to Steve Green and Tony Richards who supplied nearly all these photos. I wouldn't have anything to show of the day if it wasn't for the kindness of these two excellent chaps!
Posted by John