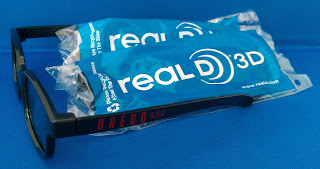 These were one of the few promotional items given away during the films release and sadly for us Brits, they were only dished out in the US.

As it said on the Dredd facebook page Be one of the first 300 people at your theatre to witness the action in Real3D and you'll score a pair of limited edition Dredd3D glasses! I knew I would manage to get one or two, due to the amount available but I also knew some people would some how take the piss!

The day after the US release I looked on eBay and there they all were. I saw some bod had managed to obtain a hundred at, strange that! So I put an offer in for three and it was accepted and so waited for them to arrive! Not long after the packet arrived and this is what they look like. Note:- I only show one opened, as I haven't opened the other two!

By the way, the reason I bought three was that it made sense with the p&p to get more than one!
Posted by John