What a few days I've had! Everything I've had to sort out about the trek has been sorted and then I get a phonecall from the BBC (a nudge from Richmond and Vicky helped) and then I have the local paper and radio onto me. So I'm doing more things, you have to laugh but saying that it has been very enjoyable (and anything that helps Hi-Ex! out in any little way can only be a good thing).

Firstly lets see what has happened on the Hell-Trek as of now.
Okay the Rad Wagon (mini bus) is fully booked and paid for, just got to collect it at 15:00 on the day and then fit it out with everything.
Firstly the finished magnetic banners that will adorn the sides (hope they don't fall off) and advertise who we are. Here is Sam holding one (in the actual 'Cellar of Dredd'). 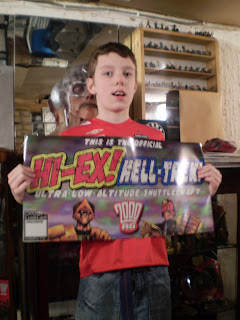 Next up I started putting out calls for tops for the trek, mainly Polo tops but we've had one T-shirt and one Hoodie made as well. You will see us wearing the following colours bottle green, blue, red, black and  grey and they look superb! These I had made at a local shop and the design for the embroidery was sorted for us by Michael Carroll who also designed the magnetic banners, for free. What a superb bloke, due to his help I have had a top made for him (he'll be the other person in bottle green) as a thank you. After I picked the tops up I decided for a fun thing to get some rations made. I did know of a website that produced personalised chocolate bars and I thought it would be fun to get something made for the trekkers and dish a few spare out to people up at Hi-Ex! I sent off the Polo top design and they sent an email with an attachment back showing how it would look with a note saying I can put some words on the back. I decided to put some relevant words on the back about the trip! 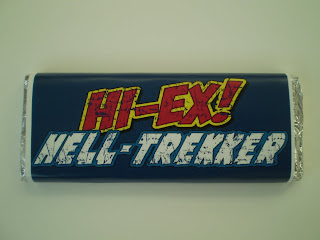 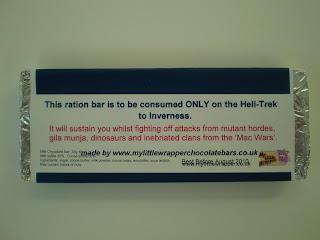 As you can see these look excellent and I'm thinking that some people may be keeping their wrappers or even the whole bar. Obviously I will keep one behind for the Cellar, which leaves fifteen for the trek, take another eight away for us lot and you are left seven. By the way a few are already reserved for certain people up there but a few other people will be lucky!
Just the other week I asked Richmond Clements to email me the convention poster so I could run a couple up and put them around the rear windows of the mini bus. I also had a couple of others ran off at the same time. The three convention ones are A4 so you can see how big the others are. 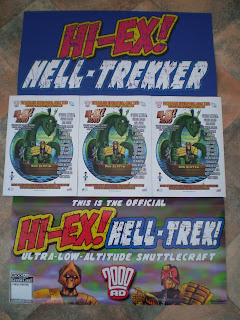 Now all I was doing was counting down the days till the trek, that was until the BBC phoned me up about it! I had a chat with the reporter and later that week the piece appeared on the BBC website. Since then I have had the Kent Messenger ring me up about it, this should appear next Friday. I also had Andy Walker from kmfm phone and we did a pre recorded piece for his breakfast show which aired on the 5th of March at about 07:40. I recoreded it on Real Player but have no idea how to upload that onto any site to be listened to, damn! Still who knows what will happen next. By the way you can see what happens on the night of the trek and over the weekend by following us on the following twitter accounts John Burdis and Gavin Leahy.
I'm really looking forward to this trip and hope to see many from the 2000AD forum up there along with many new friends to be made.
See you there!
Posted by John