The Prog that started it all. 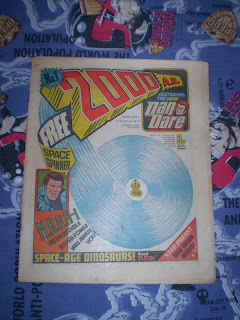 Lets' start from the beginning with Prog 1 (in those days it was actually programme 1) as this is how my love of 2000AD and Judge Dredd and therefore the Cellar of Dredd came about.

The cover was nothing much to go by as at least 50% of it was taken up by the red space spinner and the rest was the 2000A.D. logo. With a box mentioning Dan Dare was inside and he was the 'NEW' Dan Dare. M.A.C.H-1 also had a box on the cover and he looked just like Steve Austin! Still, I bought it and read it as soon as I finished my paper round before school.

What a read it was Russians invading Great Britain, cowboys and dinosaurs, Dan Dare, the six million dollar man and a sports story involving jet packs. What more could a 10-year-old want (and still Judge Dredd was yet to appear).
The violence was on a par with Battle and Action and that was fine by me, as I also read those! Looking back through prog(ramme) 1 as a 43-year-old I’m amazed at what was crammed into the first issue. 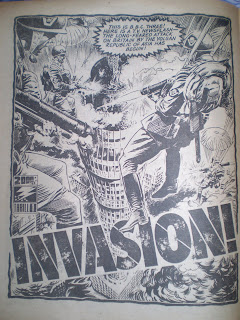 First up we have the Volgans (Russians) invading Britain in Invasion and on the first four pages we had already surrendered. In these panels the Volgs are shown parachuting onto London, tanks and fighters wiping out our forces and the midlands wiped out by a fifty-megaton bomb, phew! We also see our hero Bill Savage blast an enemy trooper in the chest with his shotgun after stopping an armoured personnel carrier.
Now having just reread the story I have realised that the Volgs actually invaded Western Europe from the paper at the top of page two, I always thought it was just Britain. Even so I do laugh at the way that the paras are firing anti-tank weapons as they descend and that Bills shotgun manages to stop an APC. The innocence of youth and now having served in the military (members of the 2000AD facebook groups know I love to nitpick the military stuff) means I rip things like this to pieces.

We move on to Flesh, the story about a time travelling food corporation. Before you know it a cowboy is being eaten by 16-metre long crocodile, a Tyrannosaur gets its head blasted off and tramples on another cowboy. A stampede of Styracosaurs tramples more men and impales one on its horn. Absolutely thrilling for a boy who loves dinosaurs and what boys didn’t!

Next up, Dan Dare the story that drew me to the comic, apart from the space spinner. The centre spread shows the space freighter “Sirius” commanded by Dan being sucked towards Jupiter’s Red Spot, upon turning the page it’s ripped apart, with one scream of AAAAGH! to show the plight of the crew. Luckily only Dan manages to survive. He’s now up for a court martial for the loss of the ship but before the day is out he’s managed to stow away on a ship that will be passing Jupiter.
Two facts that I have just learnt by reading this strip again. The first, Dan Dare says DROKK IT! Now I always thought that this was Dredd’s word. The second, having read articles about 2000AD and the way no-one was credited in the early days I notice that Belardinelli manages to get his name on the last panel as it says (in a sort of computer print) Art: Belardinelli. 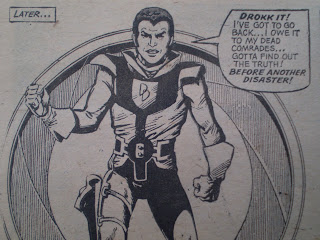 Now we have the six million dollar man, oops I mean M.A.C.H-1, which is just, like the former and you can actually hear the telly sounds in your head as he does his superhuman stuff. He manages to kick in a nuclear blast-proof door, out accelerate a Trident motorbike and kill a load of terrorists but we have to wait till the next prog for the outcome as this was all a diversion. Great way to get us to come back next week!

Finally we have the Harlem Heroes, a violent sport that is played while wearing jet packs (another kids dream). It was just the Harlem Globetrotters playing a futuristic sport, but most of this team are wiped out on the 4th page and so in next weeks prog they will have to rebuild the team so that they can win the World Aeroball Championship.
I remember reading it again once I got home from school and during the following week talking to my mates about it, constantly.

Remember, Dredd had still to appear and once he did I must admit he was second best to Dan Dare in my eyes for a very long time. Now that's all changed!
Posted by John