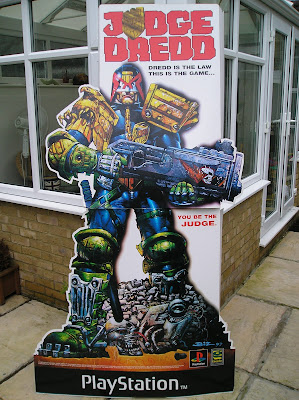 These are stored in the attic (sacrilege) but they are so large that they would take up too much room down there! Let me tell you that the last time I brought them down (for these pictures) was a right old carry on, especially trying not to bend the corners.
Anyway lets get on with them:-

The one at the top is for the PS1 system and as you can see, it's drawn by Simon Bisley and looks superb. It folds over just below the crotch and the sides of the white background fold back to give it stability. The bottom also has a few extra pieces added to help the whole thing stand up.

I managed to get this one from Game and at the time I didn't have a console. I inquired about when the game was coming out and added that if they gave me this standee I would buy the game and a console to play it on. They agreed and so the day the game came out I was down there like a shot!
Let me add that carrying all that lot back home was quite a laugh, even with the standee folded over and in a cardboard delivery box.


The next one is for the PS2 and features Dredd and Death from the games story. This standee comes in two parts:- the back is a complete figure Judge Death reaching out  to the buyer while standing in front of Mega City One. The front being Judge Dredd and the advertising for the actual game. I acquired this in the same way I did the previous one. I reminded the shop how I managed to get the previous one and said I'd buy the console and the game when it comes out if I can have the standee, deal done. It's an expensive way to get them I know! 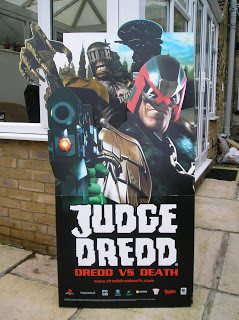 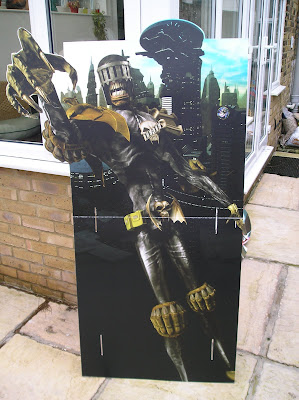 Next up is the Nintendo version that came out (from what Dredd is wearing it's obvious) for the release of the film. This one I managed to just ask in the shop and they gladly gave it to me (just to get rid of the thing, I think) and I gladly took it. This bends in half just above the name and was quite easy to carry home from the town, very light. At one stage I had this looking out the bedroom window, much to the wife's bemusement. 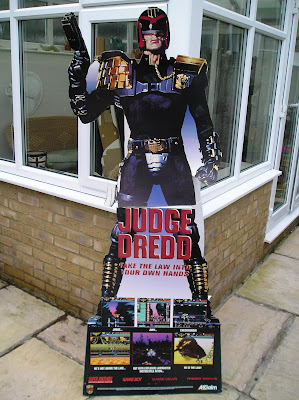 Finally I have the biggest one out of the lot. This is the movie quad stand and comes in two pieces. We have Stallone and the films title that slots into the main piece and the actual main piece folds over on itself and shows the cityscape of Mega City One and also all the credits. This was going to be (as all are apparently) put up for auction at the Odean cinema in the town, as I found out when I went to inquire about it. I asked what something like this normally goes for and then put in my offer and left it at that. A couple of weeks later and £20 out of pocket and it was mine. Now this was a bloody nightmare getting home, as the size and box it came in were just so awkward but home it went to join the rest. 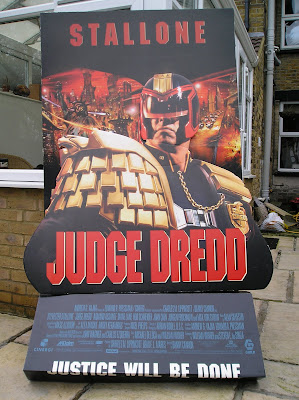 Since collecting these I think I have managed to obtain another but I can't be arsed going into the attic to find out at this moment in time, so I'll have to include that (if indeed I did get another one) when I put a piece up about the movie banners that I have managed to get my hands on.
Posted by John