A bedroom decked out with Dredd! 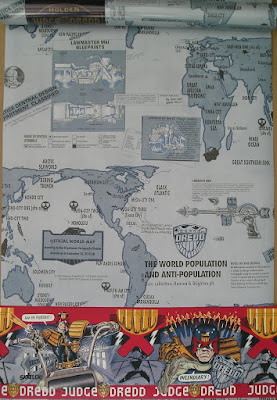 What I would have given to be able as a young lad to have had my bedroom decorated with Dredd items and by this I mean quilt covers, pyjamas, wallpaper, etc.... Since the movie came out a trickle of items hit the shops with a fanfare so quiet no bugger could hear it. Luckily through the years with the help of family, friends and eBay I have managed to acquire enough items that would decorate a 10 year olds room perfectly! Not that I would waste these precious items on my son. 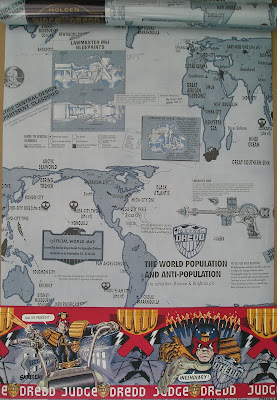 These rolls were found by my sister Dawn, who I am eternally grateful to. One day out of the blue she rang me up from Hartlepool and said that she had found some Judge Dredd wallpaper, my heart skipped a beat. I inquired 'what, how, where.' To which she replied that she had just seen a pile in a local decorators and picked one up for me and was about to send it down. I asked 'how many more are there?' and she replied 'about half a dozen'. That was it 'Buy them all Sis' and she did, plus she sent them down and didn't ask a penny for it (I suppose I didn't bully her enough as a kid). The borders were spotted on eBay, nothing more to say really! 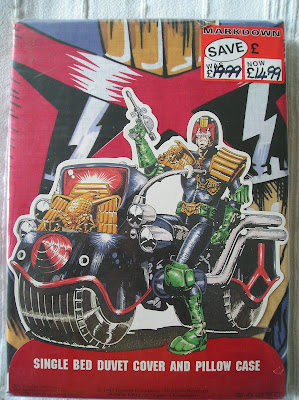 This is a fantastic item, in fact it's so fantastic I have three of them. Of which one is sealed still, this has Dredd sat astride his Lawmaster on the front while on the rear it shows a layout of a child's bedroom with the quilt being used. It also shows a pair of Judge Dredd curtains? The other two have been used, Sam has one and I bought another one off eBay for a laugh.The Quilt has Dredd on one side reaching out of the picture and saying "Sleep is no refuge from Justice, Creep!" On the reverse it is the world map from Dredd's time, with Joe's head all over the place. 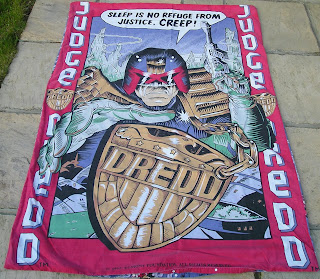 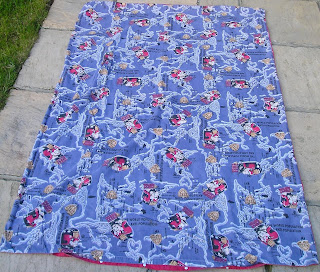 The pillow case has Dredd's badge on the front with Judge Dredd written across the middle and the reverse has the map on it like the quilt cover. 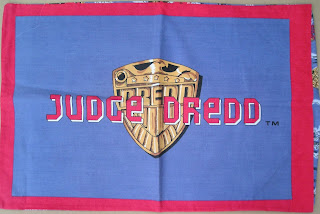 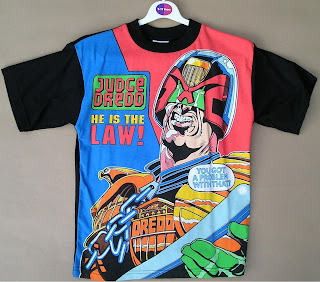 These I found in a children's clothes shop and it was the only pair, if there had been more I would have bought various sizes and actually have let Sam wear some. Alas there was no more in the shop (I did ask) and so Sam never got the chance to wear them. The top is Ron Smith's work I think, the back has nothing on it and the bottoms are plain also. 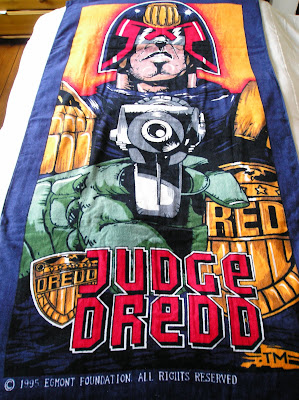 This towel I found in Maidstone market a few years back, I think it cost a fiver. Last year (2009) I watched one go for over £50 on eBay! 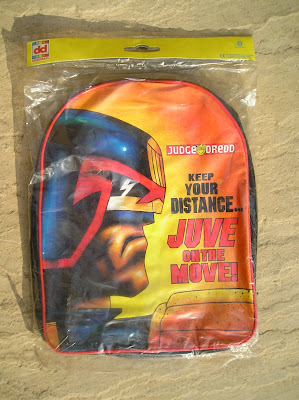 This was another find in a cheap shop in town, just a chance turn of the head and I saw it, otherwise I would have walked straight past it. I was also given another of these at Thought Bubble by John Wagner himself! 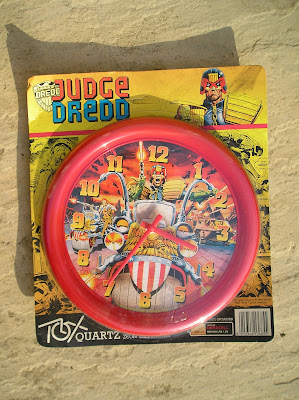 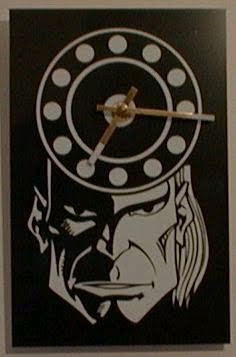 These again I picked up off ebay. The round clock is quite flimsy and cheap, the sort of thing you would pick up in the pound shops. The Tharg clock is something that the 2000AD shop sold many moons ago if I'm not mistaken.

Clothes:-
These I'll put into a couple of separate blogs, as this one would go on for a long time otherwise! I could have put the Dredd Dressing Gown up but alas I don't have one (as of yet!). Another showing on how well advertised the stuff was when it came out. Another collector, Rob Stewart has one on his site 2000adcollectables have a look around and say I sent you.
Posted by John