Seeing as Tharg hasn't started making T-shirts and Polo-Tops with personalised Judge badges on them, I thought I would give it a try. I can't design stuff and I definately can't make stuff, so I just became the facilitator in the whole process.

Many moons ago the extremely talented  Mike Carroll came up with a badge design thing on his website,  you typed your name in and a badge appeared with it on! Here's a quick link to the website and it's not just Dredd's badge that you can have, as you'll see when you have a look!


After chatting to Mike about trying to sort out a badge to embroider onto a top, he made a design that would be easier to use. The problem with the one on his site was that it was too realistic!
Here is the design he sent me and this was just perfect for what I needed. 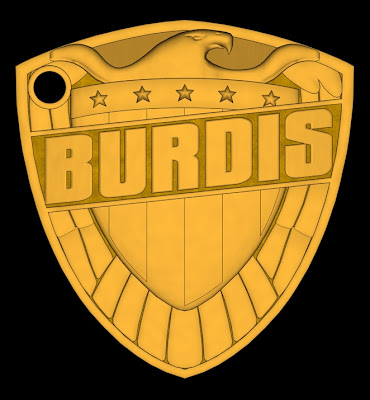 The next stage took bloody ages, mainly because the firm I used for the Hell Trekker tops wanted some sort of computer file thingy, so they could change bits to make the stitching do something or other! Because of that I put the whole thing on the back-burner and left it in my jobs to do. That was until a few months ago, when I decided to do a search on the computer for embroidery places in the town. Luckily for me there was a place, which I had never noticed before and I walk past it each week.
I took the file of the design in and they said that it would be no problem what so ever. I ordered 3 Polo Tops straight away, 2 for me and 1 for my son Sam. Now I had to wait until they came back with a computer version of how the badge would look. It wasn't long before this turned up and I was amazed. 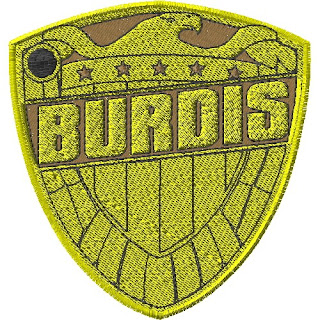 The colour around the name, stars and eagle are all gold as well but just a slightly different shade, so as to make it stand out more. Now all I had to do was wait until the finished tops were made, as this was the final confirmation stage.
Here's a close up of the final finished badge. 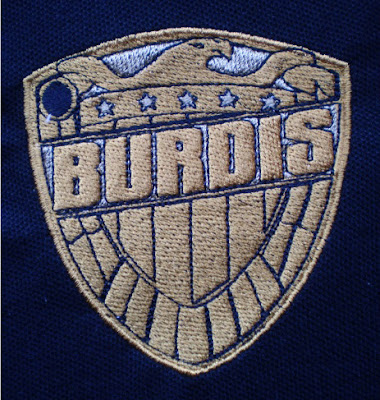 And just to show you how good they look on, here's Sam and me wearing our new tops. Sam wanted to hold his hand up and as you can see, due to his tears, we had a small arguement but he still won! 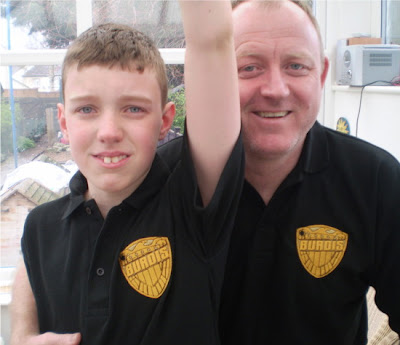 I will be having a couple of T-Shirts and probably a singlet vest made with this badge on now! So there is proof, if it was needed, you can make your own personalised embroidered Judge badges. By the way they came out for under £20, which was not bad at all.
Posted by John