You all know the Day of Chaos storyline and how those stinking Sovs, yet again attacked Mega-City One. The aftermath has thrown the city into anarchy, as the Judges try to regain control of a much smaller and more manageable area of city sectors.

During this time the city needs as many Judges on the streets as is possible and so the Chief Judge has ordered that clone judges from certain bloodlines 'must' be fast tracked from cadet to Street Judge, with immediate effect!

There is one stipulation, by order of Dredd! They must be passed by one of their bloodline, as this will be the toughest test of all, especially as the city is in freefall.

This story deals with how grizzled veteran Judge Burdis takes one of his clones onto the streets for the hardest day in this cadet's life.

Forget what you have read before from the streets of the Big Meg, this is judging at its best. Cadet Burdis must prove himself over a 24 hour period, while the city is overrun by Sov agents, rogue City-Def units, street gangs and all manner of perps!

Will this by-the-book, fresh faced Burdis be able to handle the streets under the steely gaze of his mentor, or will he succumb to the horrors of this new Mega-City One before the day is over!


Here is that extremely rare cover! 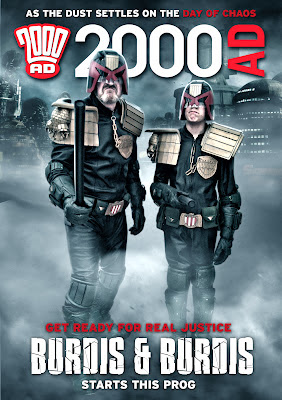 I'm sure by now that you know this is all a joke!

I would like to thank Steven Sterlacchini of Judge Minty fame for doing all the hard work in this cover
Posted by John 3 comments:

The Judges and John Wagner hit The Peach Tree 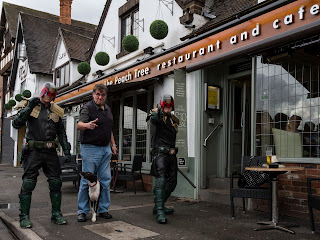 I'm sure everyone knows the connection between the cityblock called PEACH TREES in the DREDD movie and THE PEACH TREE restaurant in Shrewsbury, you don't! Well shame on you!
The connection is this, John Wagner (the creator of Dredd) met Alex Garland (screenplay writer of DREDD3D) there about 3 years ago, to talk about everything Dredd for the movie. So the cityblock in the film is named after the restaurant, it's that simple!

A few weeks ago me and Steve Green mentioned that it would be good if we could get a few photos of Judges at The Peach Tree. This idea came up when we were full on Dredd at the LFCC. Once I was home I couldn't get the idea out of my head!

I looked on the web and found the place, very nice indeed! In fact have a look at it yourself here and if you are ever in the area pop in for something to eat and see where the movie really began! I contacted Grant Lees and explained what I would like to do and the reason why and he was up for it. He already knew the connection, along with the staff who were very excited about the movie. All I had to do was contact Sian the Restaurant Manager, which I did, to arrange a date and time. The date was looking like the 4th of August and it would take place at 15:00 onwards.

During this time I contacted John Wagner, as I knew he lived in the area on the off chance that he would be available for a few photos. I also contacted Darren Beddows who lives in the town, as he has worn the uniform a few times and is a Judge Minty cast member. I did contact a few other people who have Judge uniforms but weddings and birthdays would be getting in the way. I told them that those events happen all the time and where was their commitment but to no avail, it was going to be me and Darren as the Judges.

John replied with a yes for the 4th (so that was the date) and Darren confirmed the 4th as well. I was bringing Darren's uniform down to him, as Steven Sterlacchini (Director of Judge Minty) had left it with me the week before after filming, just for this purpose.

The date was approaching fast and I had let on to what was happening via the 2000 AD forum and Facebook but the John Wagner part was a secret. I did tell Pete Wells of the blog 2000 AD Covers Uncovered the whole story and he said he would love to come down and so I invited him along as Steve's camera dogs body! Again, this was going to be another marathon staying awake session for me, as I was at work the evening prior.

Saturday came and everything was on and so everyones journeys, of different lengths began. The drive was okay apart from the weather and traffic but who cares! When me and Steve arrived we walked up to the local (1 mile away) Police Station just to inform them about what we would be doing and that we had fake weapons. This was just in case anyone thought something strange was going on and rang them in a panic. We just managed to get back to the restaurant for 15:00 bang on!

Everyone had turned up on time and there was John walking towards us with Bomber his lovely dog! We made our introductions and talked about what we were going to do and then Darren and myself went inside to change. Darren had already seen Sian inside and confirmed that we were here and so all I had to do was introduce myself and thank her for allowing this.

Not long afterwards we were ready and the shoot began! Here are those pictures, as I know you have been waiting for them and have probably skipped through to get there.


REMEMBER to click on a picture to enlarge it.

Upstairs at The Peach Tree 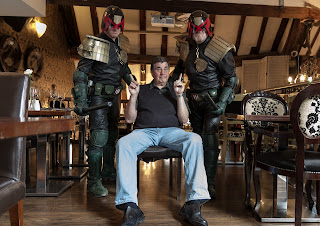 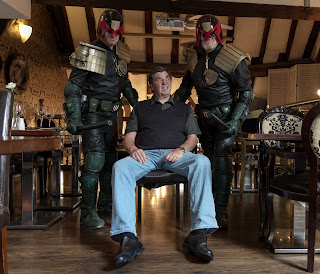 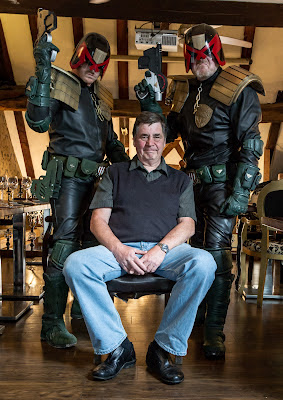 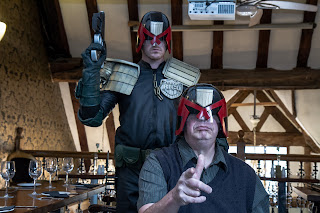 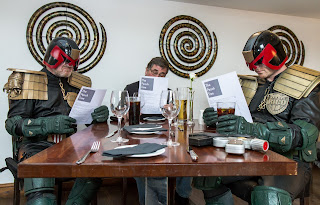 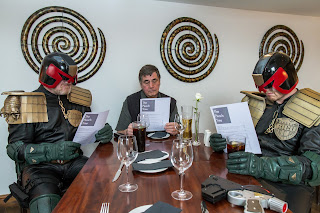 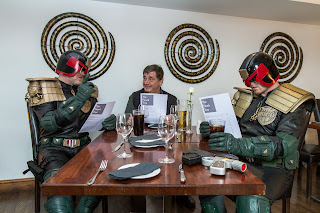 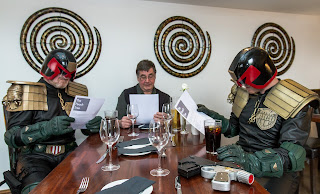 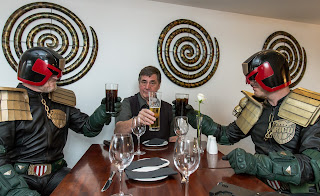 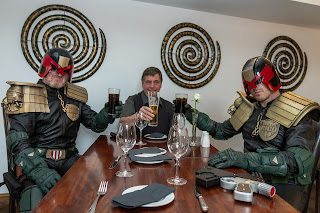 After we had finished up stairs we made for the street to try and get some photos with the name of the place above us. This was going to be slightly harder, due to the weather, people and cars getting in the way but I think you'll agree Steve did a great job. 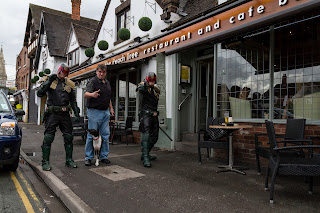 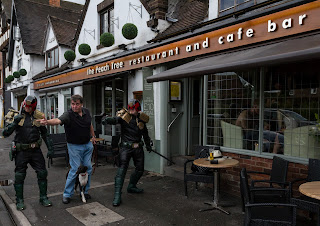 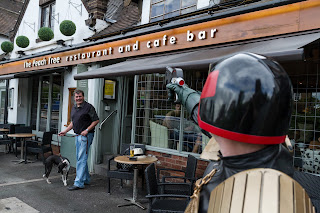 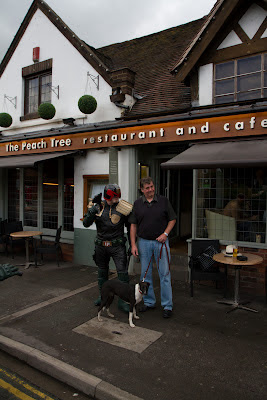 Two of the ladies who work at The Peach Tree
joined in for the final photo from Steve. 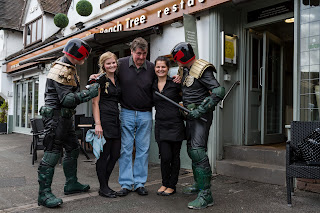 I manage to capture Darren as he's about to drive home after the shoot! 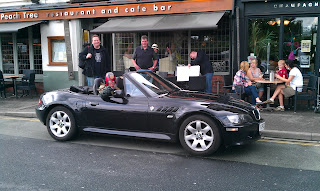 After we had finished, I changed back into my civilian attire while Pete showed John some art (you can see him sorting a page out in the last photo). I thanked the staff inside and we finally left The Peach Tree. After visiting this restaurant and bar I would say that if you want to go to the place that the film really began then this is the place and if you do, just mention DREDD.

By the way, just in case anyone is wondering what happened to Bomber, John's lovely wife Jen was looking after him outside, while the shoot went on!

We were ready to depart but the day was not over yet folks, not by a long chalk but that tale is for another day!

Finally I would like to thank all those involved in making this happen, including Grant and Sian from The Peach Tree and especially John for being such a gentleman.

By the way, my dedication to Dredd stretched to 38 hours without sleep this time!
Posted by John 6 comments: