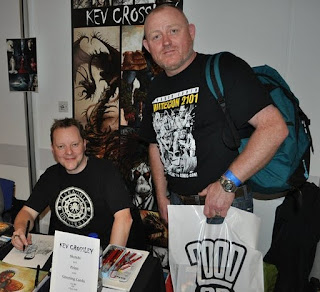 When I was at BICS in 2010 I met the artist Kev Crossley. What drew me to Kev's table was the banner behind him with Dredd on it and the actual painting from the banner was on his table. I enquired about the painted Dredd only to be informed that it was a commission, so I couldn't get my hands on it, DROKK!
That got my mind thinking, commission you say!

I asked about how much such a painting would cost, he gave me the price and I said on the spot I'll be up for one of these of my good lady dressed as a Judge. If you want to know the price of such an item then get in touch with Kev HERE and I'm sure he'll sort you something excellent out for your wall as well. You'll also see his covers that he has done for MEG 263 and PROG 1560 as well as all his other amazing sketches and commissions.

This commission was a surprise to my wife (I know it's really for me) and so I had to send Kev loads of family pics to start him off, rather than any posed ones. This proved to be a problem later on!

First up Kev came back with the pencils but no facial details, as he wanted to confirm that I was okay with the design. I know some of you sharp eyed folks out there will have noticed the can opener hanging off one of the pouches. This is something of a signature for Kev and I was happy for it to be included, as who knows one day it might just become Judicial issue.

Don't forget, to enlarge any picture just click your cursor on it! 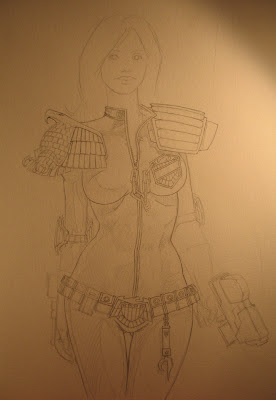 Next up was the detail of Carolyn's face and a few more added details before the painting. 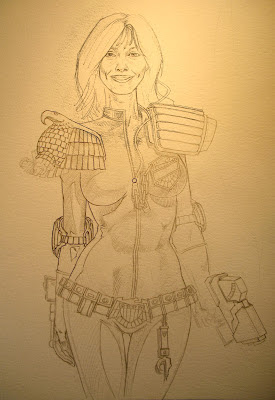 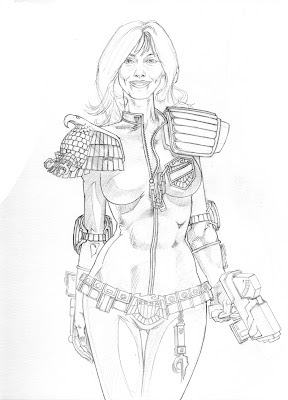 Next up was a wash (I'm not arty, so I'll let the pics speak for themselves now!) 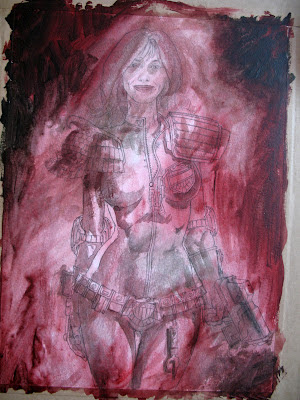 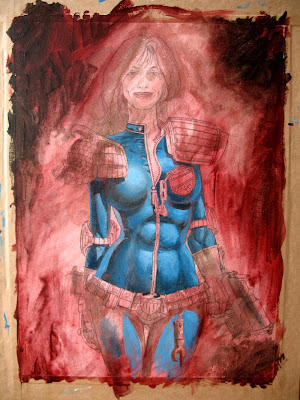 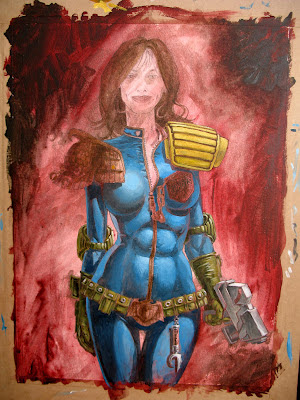 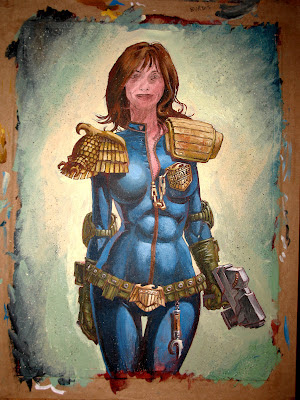 This was where my surprise was destroyed as Kev needed closer detail of Carolyn's eyes, so I had to tell her what I was up to so I could get the pics! 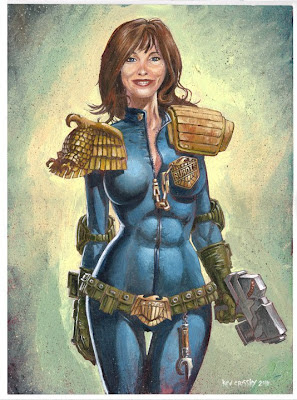 I'm well chuffed with the finished piece and watching the progress unfold. It's framed and on the wall now and as I've said before letting it stay at the framers is the hardest part.
Many of Carolyn's friends have commented on the artworks of her adorning the walls of the house and all have been positive!

So there you go folks, another commission in the house. Again I must say it is a wonderfull thing, going through the whole process from start to finish and I highly recommend it to everyone. These works of art are not as expensive as you think, so why not get in touch with Kev and start the process yourself.
Posted by John 4 comments: 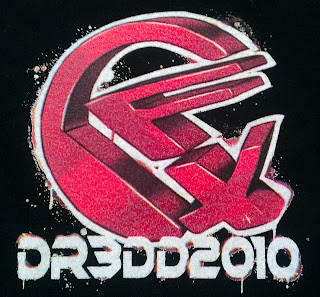 If you are a visitor to the 2000 AD forum you will have noticed that one of the newest members actually worked on the film. His name is Michael Van Kesteren and he was part of Altered States and did the manufacturing side of things including props, bits of wardrobe and little bits of set dressing here and there!

I asked Michael if he had anything at all from the film that I could have, as I'm a firm believer in the motto 'If you don't ask, you don't get'. I was very happy to pay for it, even down to bits of call sheets and the likes.

To cut a long story short Michael was coming over to the UK and so I met him at Cardiff Comic Convention where he gave me this superb T-Shirt, as worn by the CFX team. I was well chuffed and wanted to get him a few drinks later in the bar but alas he was not well, so I will put those drinks on hold until we meet again!


Here is the T-Shirt as worn by me with a few close ups. 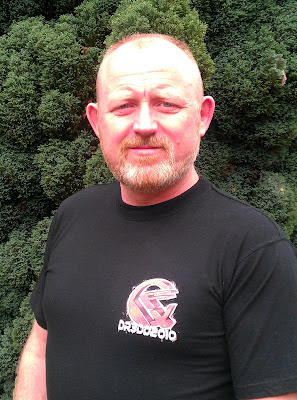 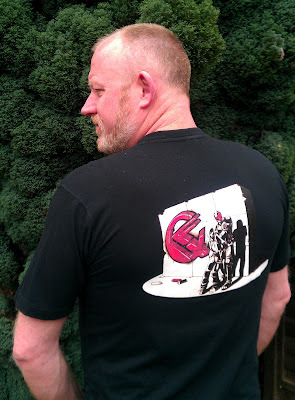 The above pictures were taken by my wife under duress! 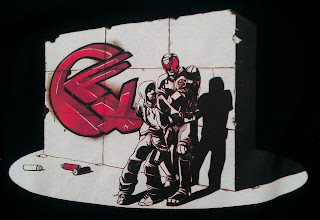 The company CFX was in charge of fabrication during Dredd. Michael and his collegues were working for them doing designs and some actual fabrication too!

The actual design for the top was by Andre Human who has drawn the South African graphic Novel Ma which looks quite stunning.
Posted by John No comments: