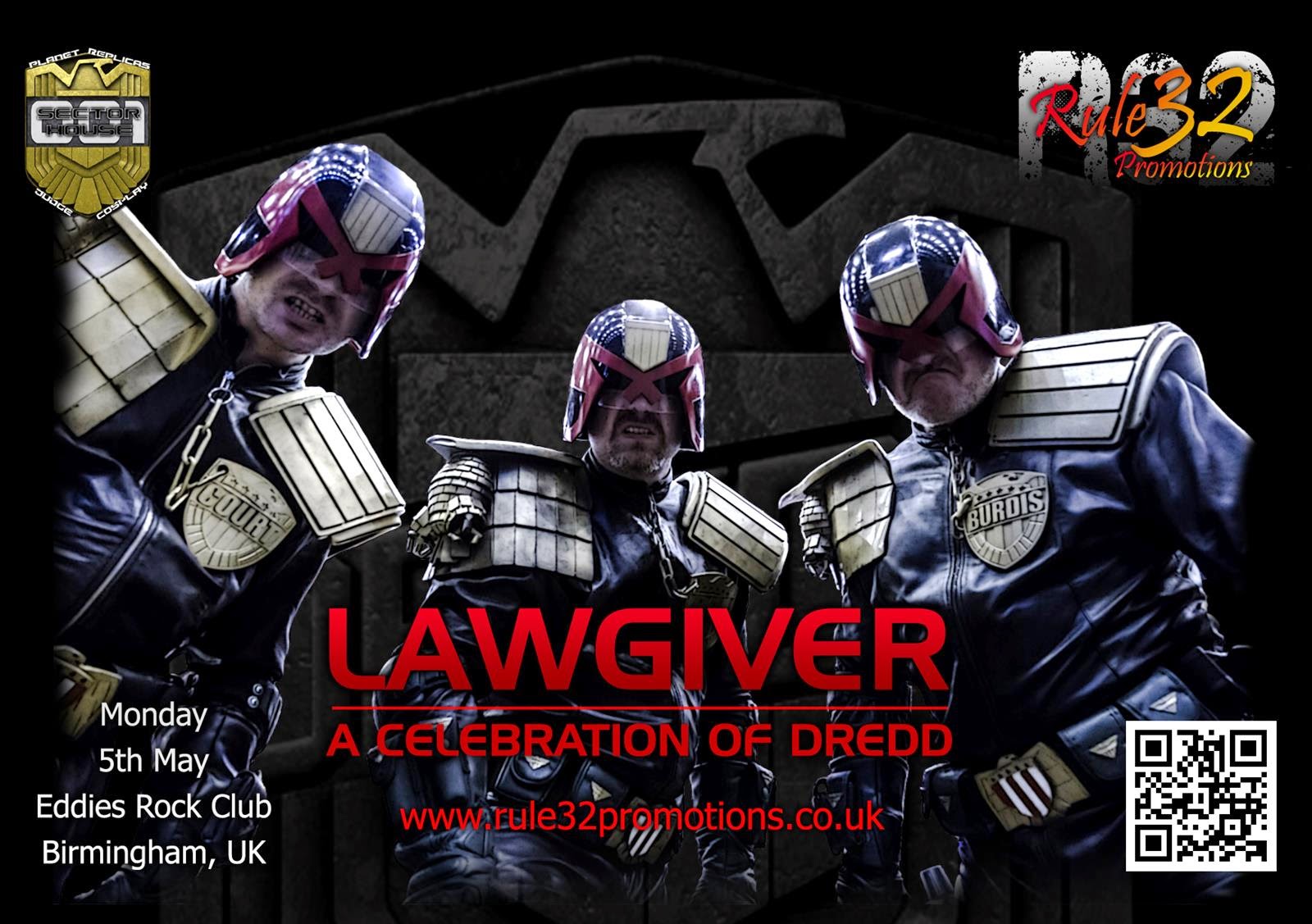 Well folks, what an event! After many years since the last Dreddcon (which was held in a pub) we finally had a new version of an event for fans of Dredd and all from the wonderfully enthusiastic Su Haddrell and her exceptional team, who really pushed the boat out on the day! Su is below being questioned by myself and Judge Pal 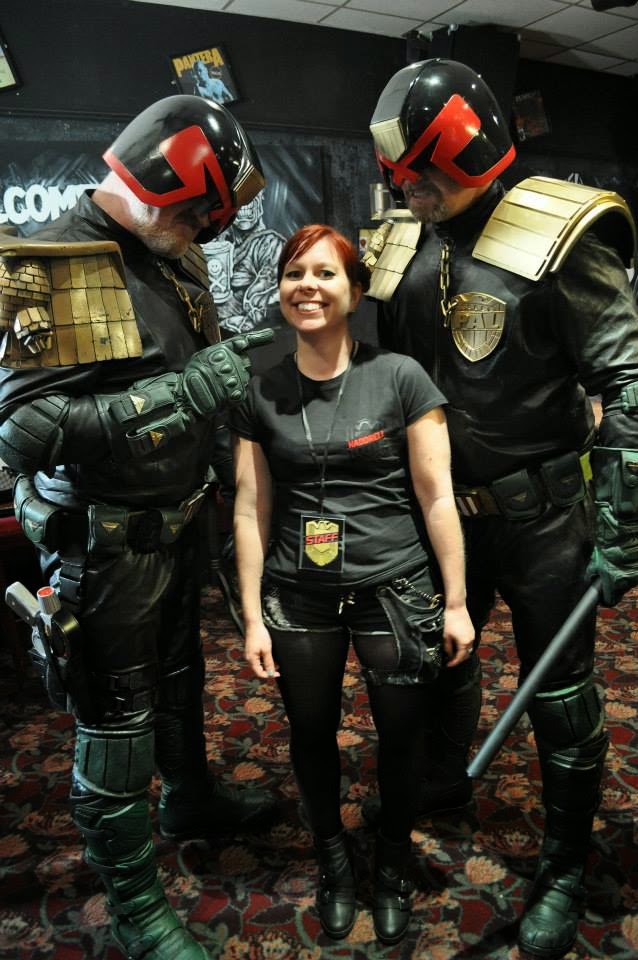 I was travelling up from the Cellar at 06:00 with Ashley Beeching and picking up Guy Robins and Steve Green along the way and the car was full of items. Obviously the Plant Replicas uniform but also standees, items to sign and camera gear, that's obviously Steve's. We arrived about 09:30 and settled down, before the doors opened at 11:00.

Here's a quick rundown of the creators and guests in attendance (just click on their names for links):-

There were various panels throughout the day, as shown in the poster below but there was also a tombola (with some superb prizes), a 'Chin Off' (which I'll mention later), a You Be The Judge area, a gaming area with loads of Dredd action, a dealers area and a signing & sketching area! 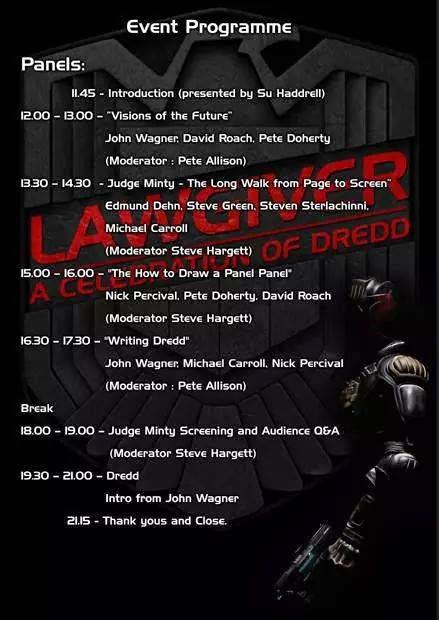 Due to this being the first, of hopefully many Lawgiver events, it was intimate and very friendly and that's what makes this stand out from other conventions. All attendees can grab time with their favourite creators for a chat, a sketch or multiple signatures and obviously some great photo opportunities. This is something that is not always possible at larger cons!

The panels were very entertaining. I actually managed to watch the whole of the final one Writing Dredd, which had Michael Carroll, John Wagner and Nick Percival on it and it was extremely informative and very, very funny. Now don't even ask me what they said, as the rule of all conventions is as follows:- "What's happens at the Con, Stays at the Con" Otherwise how are we supposed to get people to attend! The moderator on this, Pete Allison had some great questions and knew when to let the panel chat between themselves. 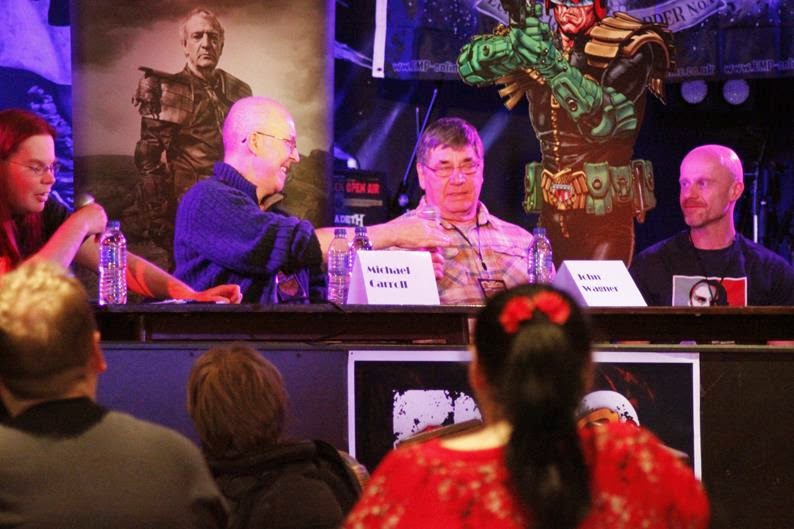 I did catch little bits of the other panels, some of which Steve Hargett ran, as I did my thing. Each had the audience laughing and asking questions throughout, which is down to good moderating and obviously the stories from the panels!

The Judge Minty Team held a panel and in the background, on screen, they showed never seen before footage from the filming, mainly taken by other people who helped out, another con exclusive!
Another! I hear you say, yes folks another, as the star of Judge Minty was there, the delightful Edmund Dehn for his first official appearance at a convention!

During these panels the other guests busily signed items and feverishly sketched away for all who asked and also regaled fans with tales about their work. Some of the sketches that I managed to see both in the flesh and on facebook since are absolutely stunning. I'm always amazed that the artists can sit there under the pressure and close scrutiny of the fans and produce such 'so called' sketches.
At the same time the writers would be forthcoming with other stories and answer any questions that had been niggling people, especially if they were too shy to ask during a panel. Luckily for some both John and Mike needed escorting to the pub by Judge's Pal, Aberg (who had flown in from Sweden especially for this con) and me. Luckily for us Tony Richards managed to capture this on his camera. These are the extra special parts of being at such a con!

There was no need to leave the convention for food, as tat was supplied in house and at a reasonable price and it helped sustain the Judges, guests and attendees throughout the day. Did I forget that the bar was open as well, yes drinks could be bought less than 10 feet away from the seating for the panels, pretty drokkin' cool!

As mentioned earlier, there was a 'Chin Off' competition and this was to win an outstanding A2 sized print by Nick Percival, which is below! 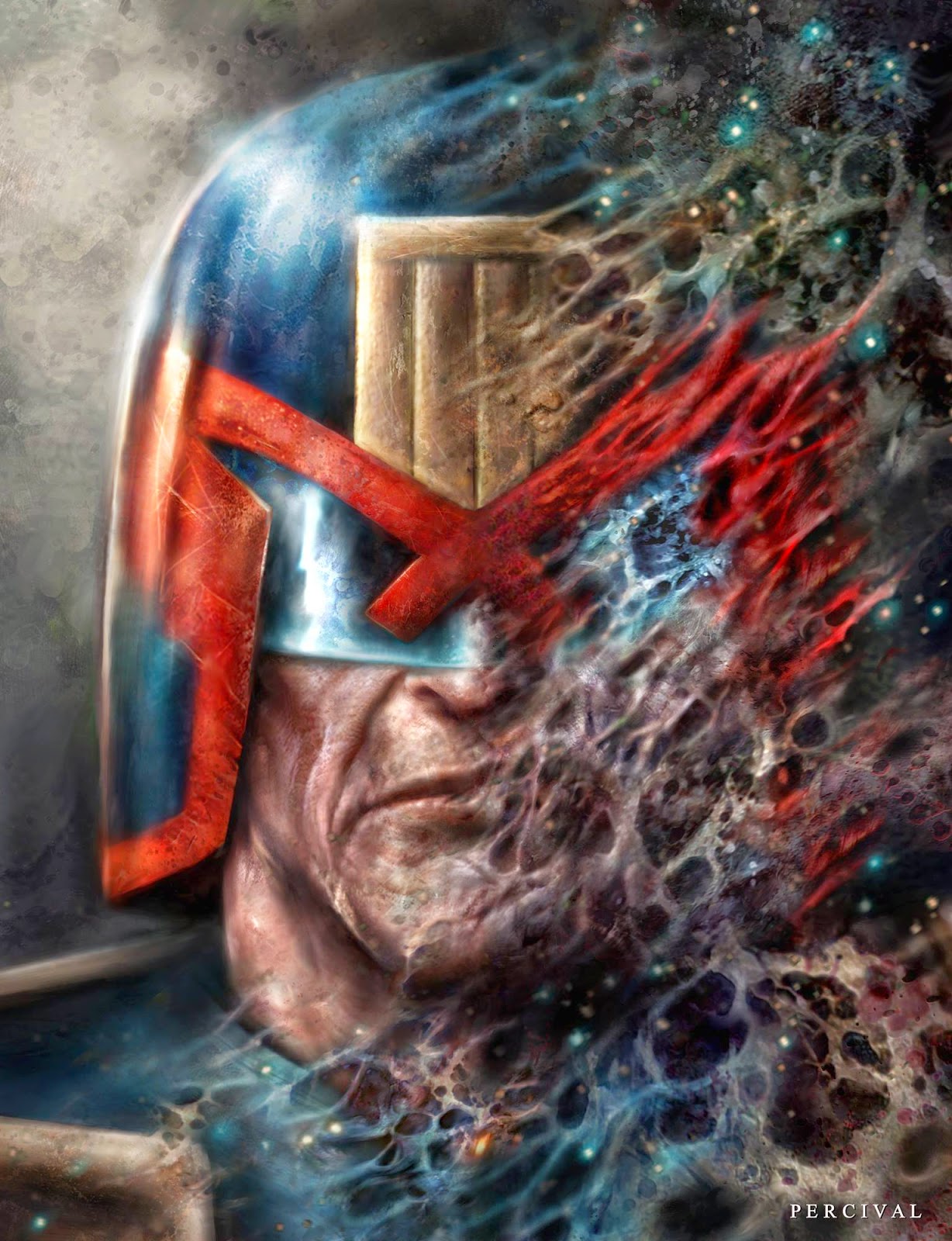 Everyone had the chance to win this and all they had to do was wear one of the Planet Replicas Judge helmets and do a Dredd chin front on and in profile, followed by saying 'I am the Law' This was in front of everyone and John Wagner and myself voted on the winner and we unanimously agreed on that, which was Ivan Noel (in the top pic in red and holding the print).
I have to say, this must've been a very daunting task, as said above they did this in front of everyone and obviously the man who created the character and all I can say is 'well done to all who had a go'

Here are a few pics of that event happening...

Also during the day you could have the chance of looking like a Judge, as the Judge Minty Team had brought up jackets, helmets and Lawgivers and this was very popular. Some people were shy at first but once they wore the robes of office, they loved it! I'm pretty sure that many peoples facebook pages may have a new profile picture now! 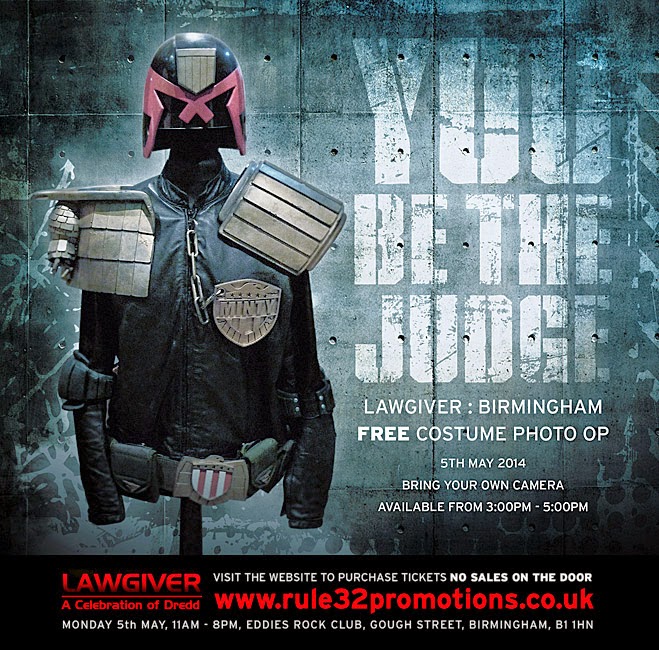 Here are the uniforms waiting for the eager and not so eager to try them on!

Would you believe it, I had to force a mate to wear this but once the jacket was on I could see that he was enjoying it and so just to embarrass him more I'll post a pic of Ian on here!

Throughout the day the gaming area was where people battled Judges against perps. Something I have never done, even though I have all the games! one day I may find the free time to learn this stuff! 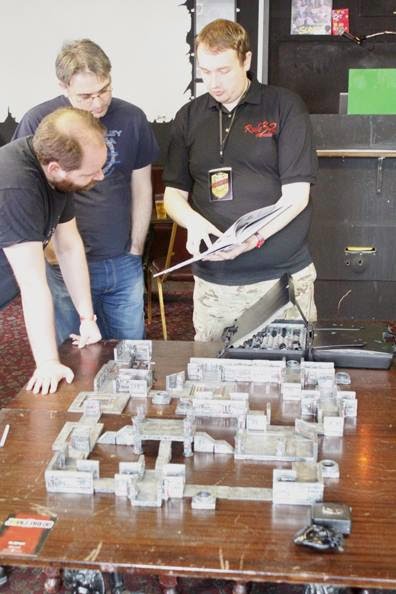 All in all, for a first con this was pretty damn good. Let's hope that when the sequel is announced more fans come along and help make it bigger each year but not too big, as we wouldn't want to lose the intimate feel.

A sign of a good con for me is not managing to fit everything in during the day and I saw one of my travelling companions only once during the day, as I was that busy and that was only when I arrested him!

One funny note, due to the trains being terrible Edmund was a little late, so as to save him another horrendous journey back, he jumped in my car with the rest of the reprobates. remember folks , it was rather full on the way up but let's just say, he arrived home safe!

I'm sure I've missed loads out but I know that there will be reports flying around the web by loads of other people, so I can relax in that knowledge!

I'll end on a montage of pics from the day. These are borrowed from Tony Richards, Lawgiver's facebook page and anyone else who posted them. They'll mostly be of the Judges but who knows what else I'll find and post. So sit back and enjoy these! 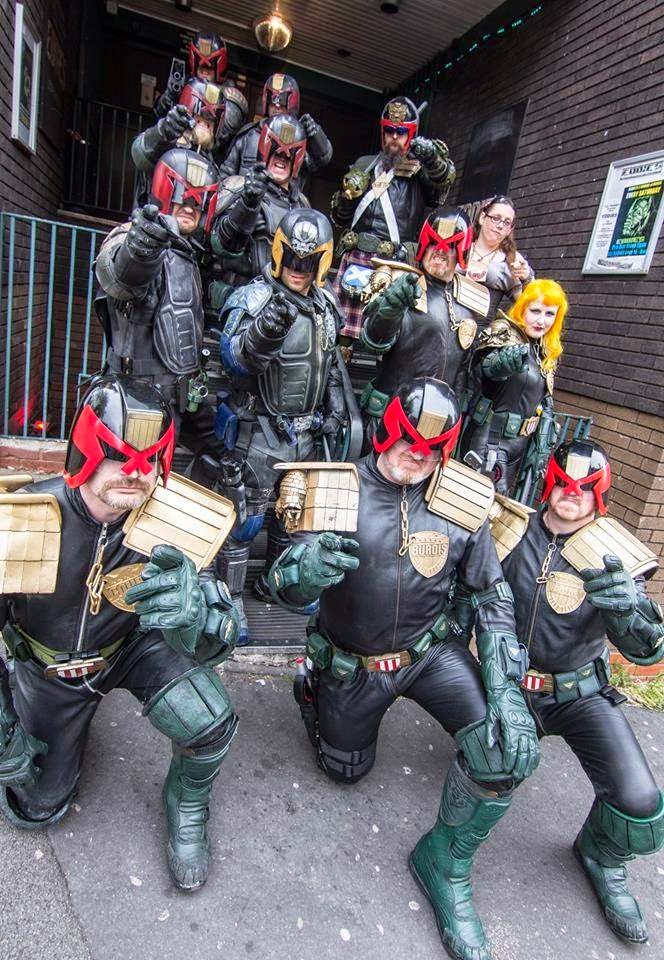 What a gorgeous bunch 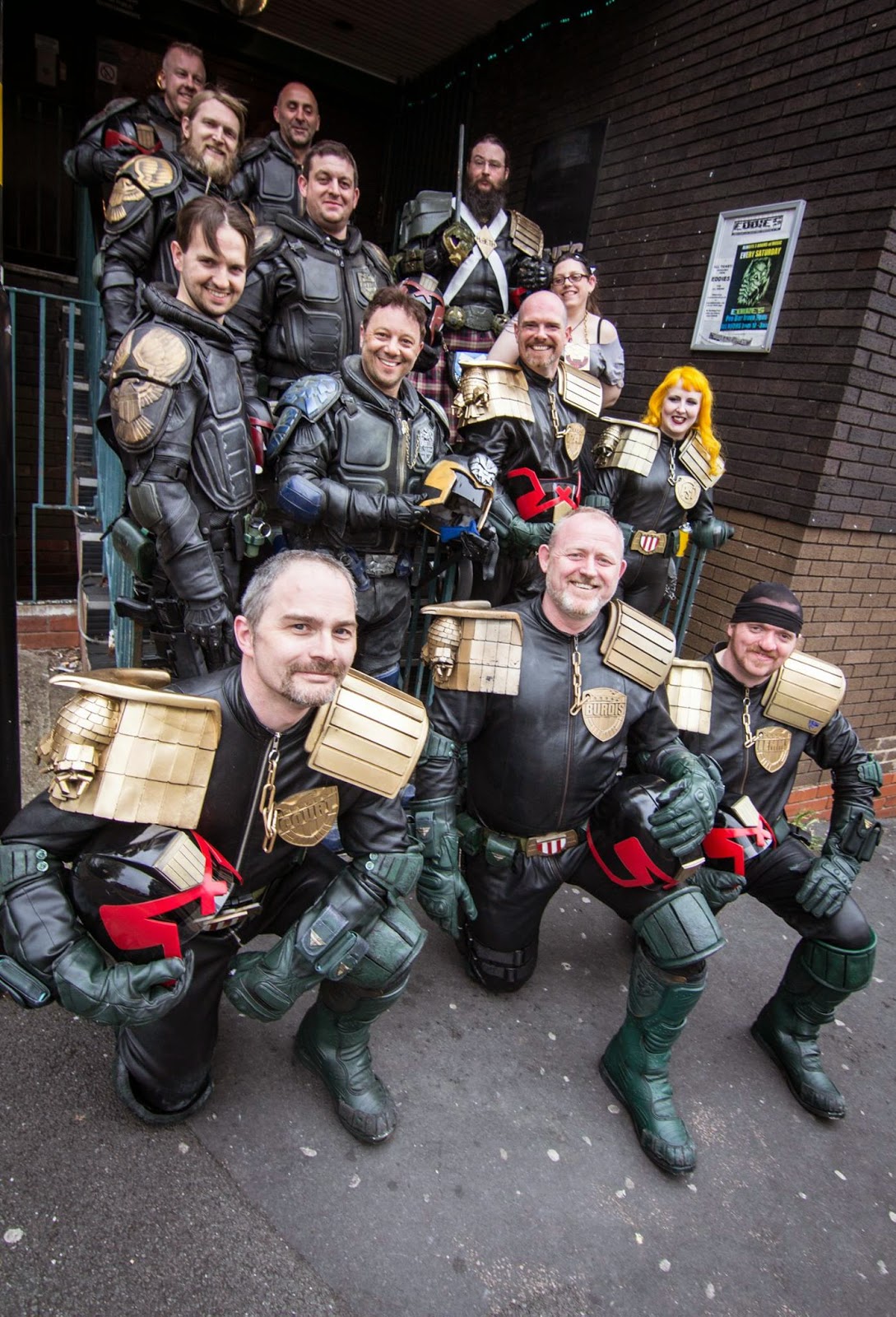 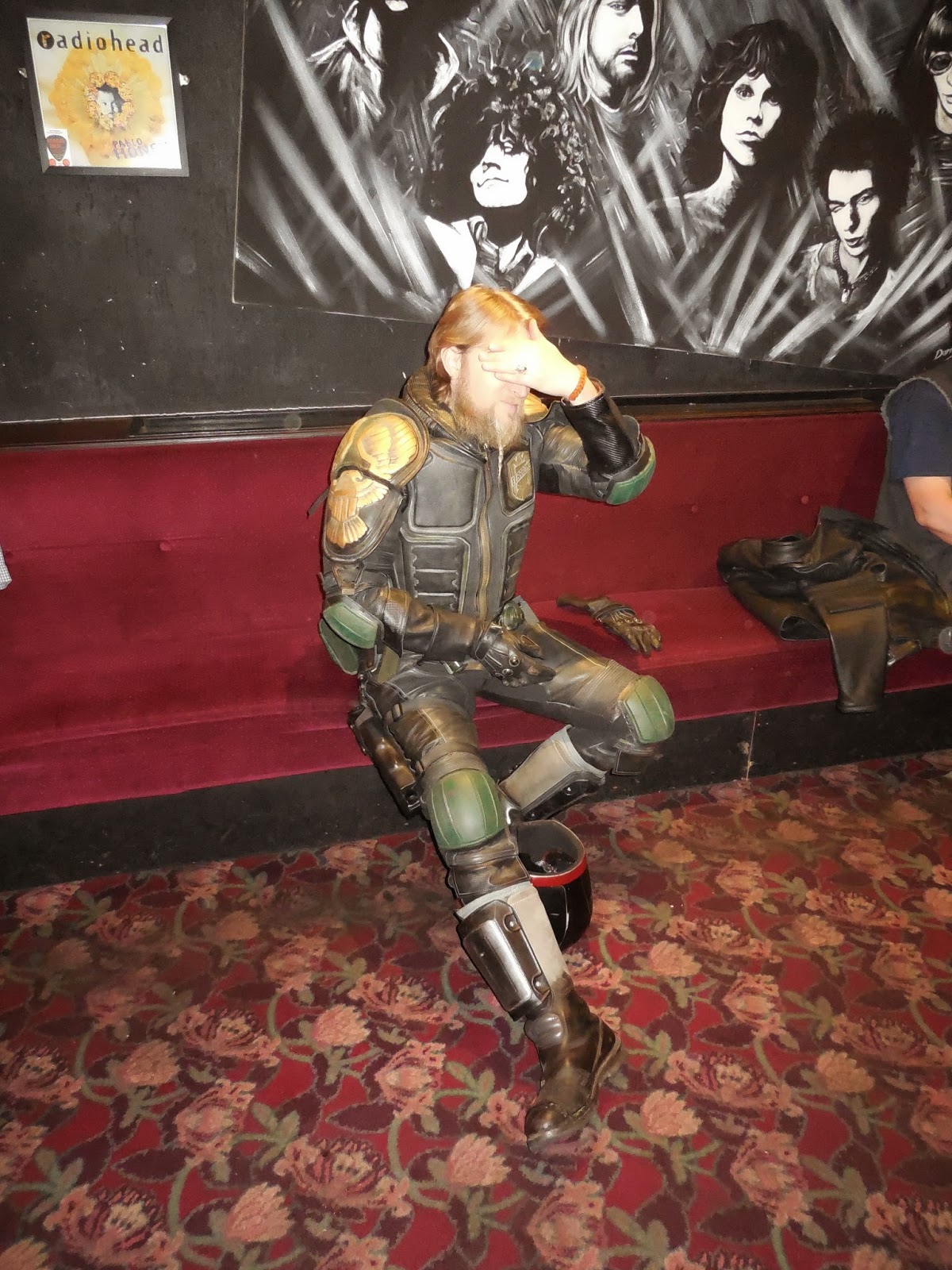 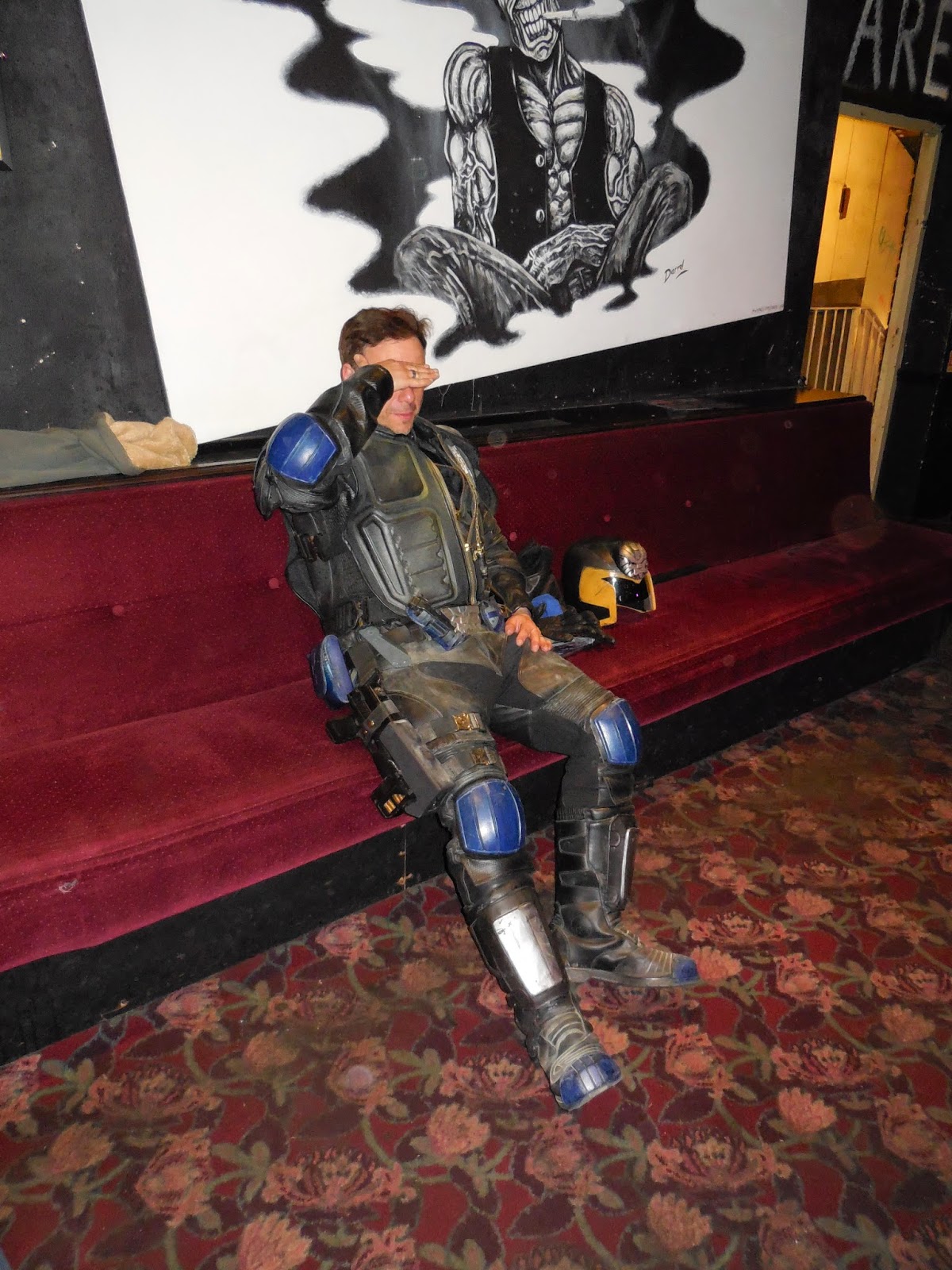 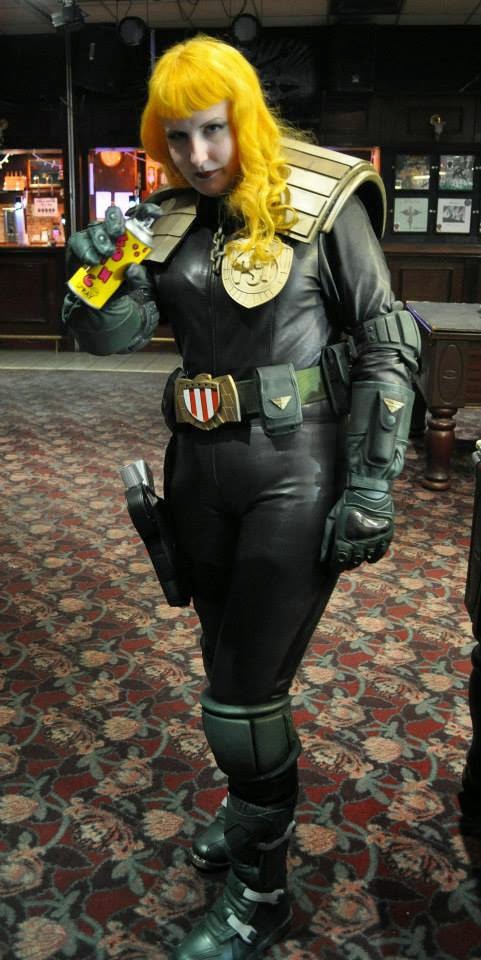 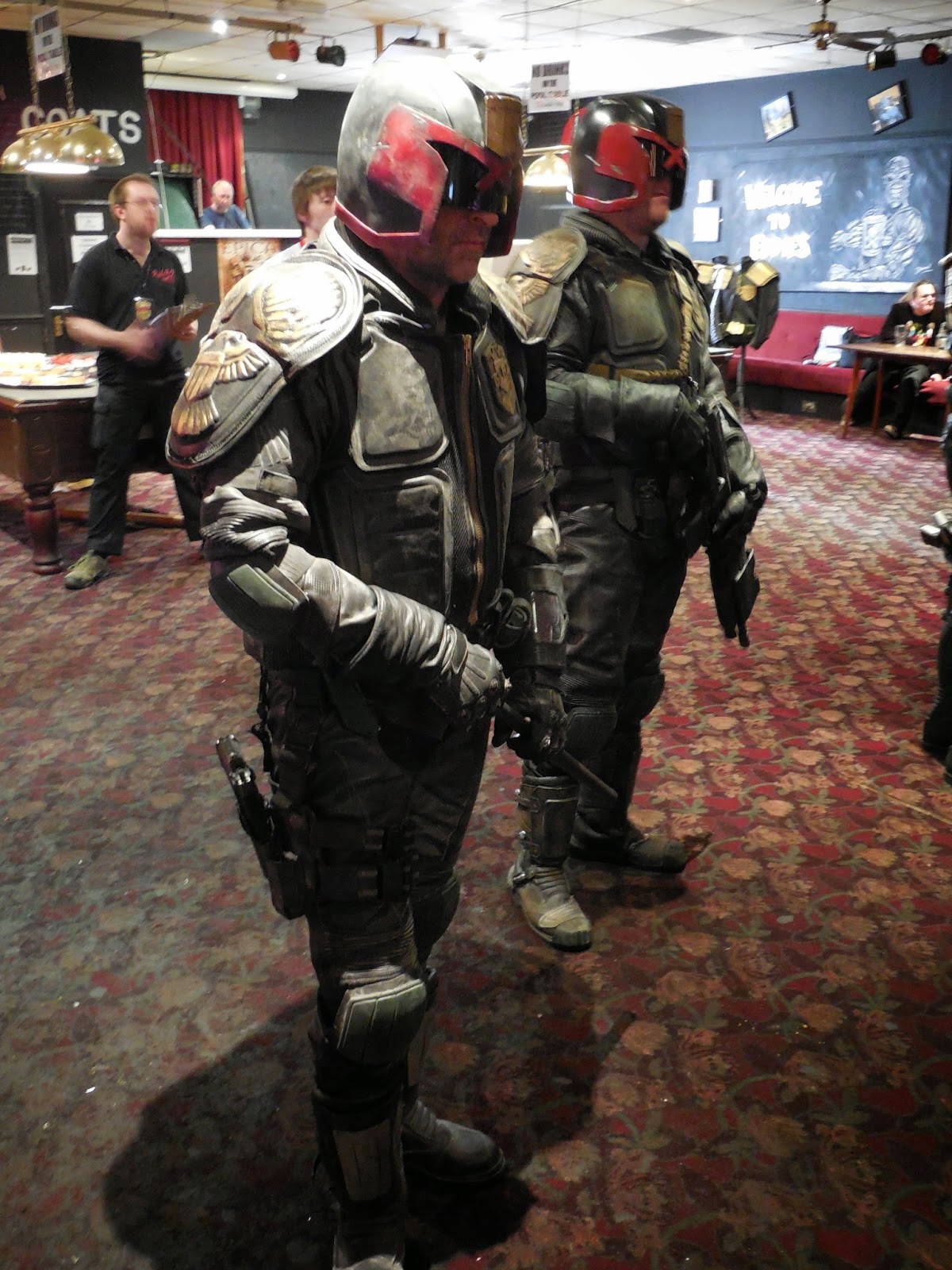 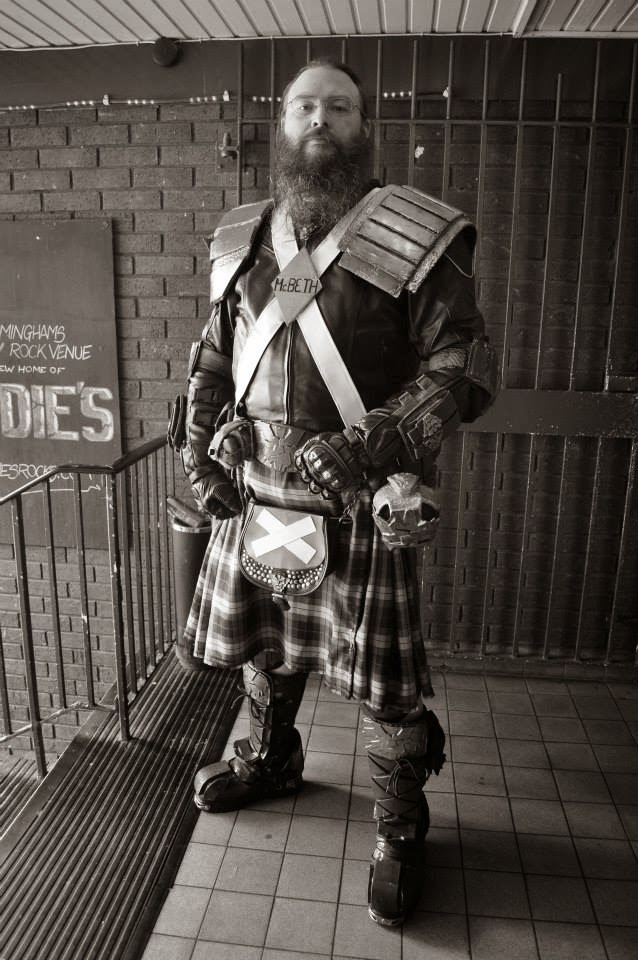 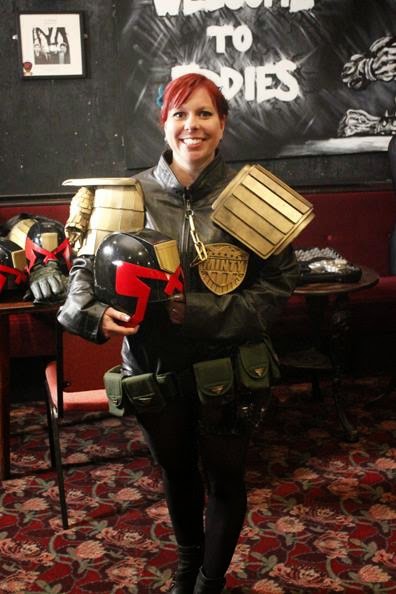 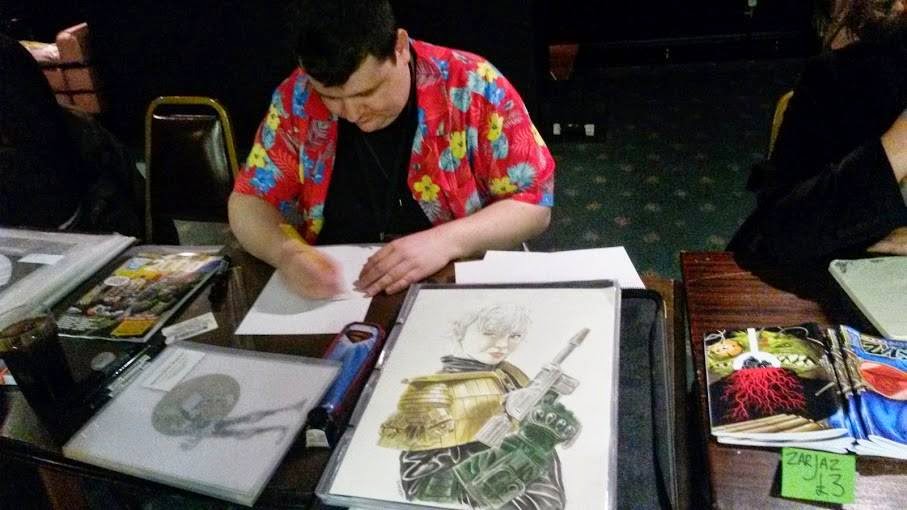 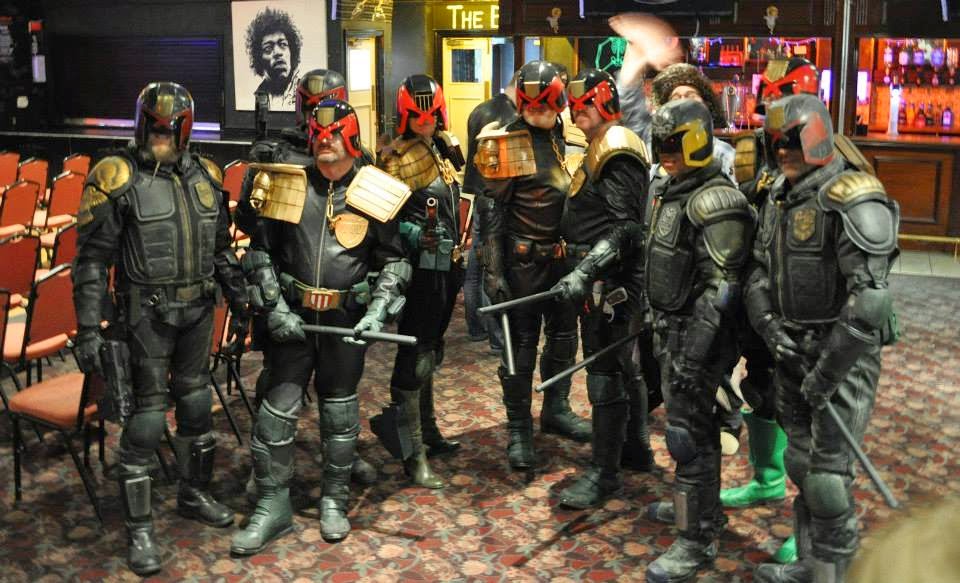 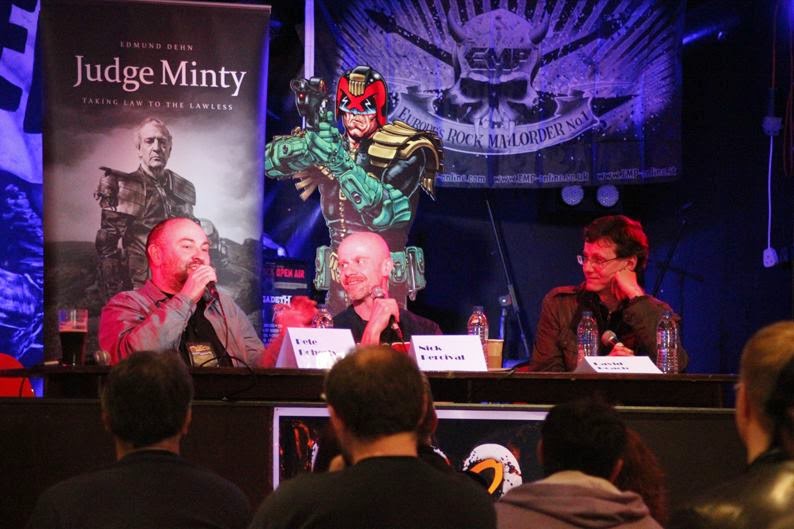 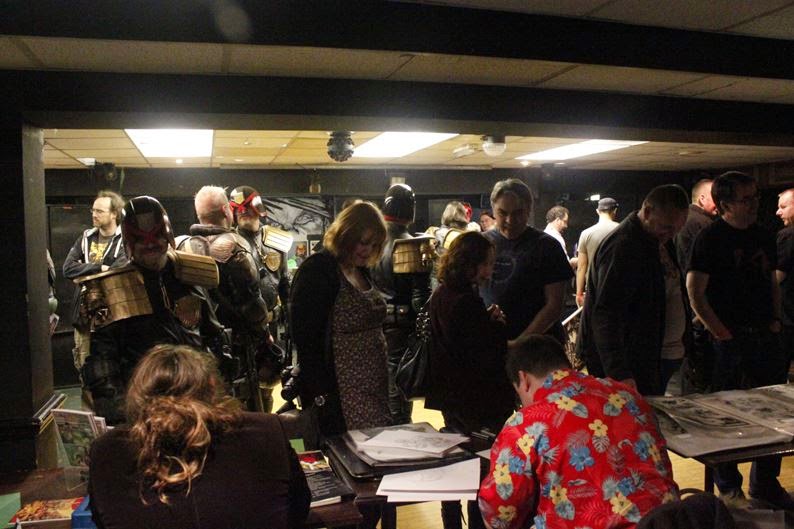 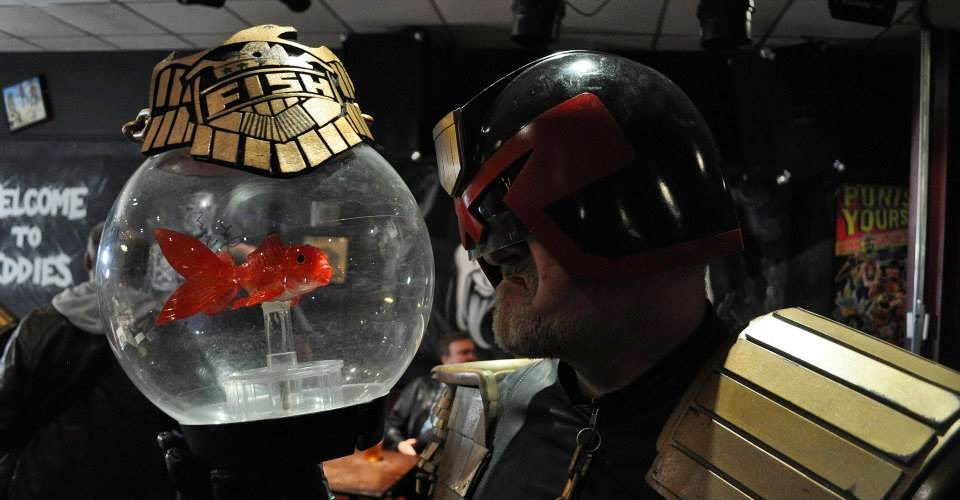 Judge Labelle and a Simp 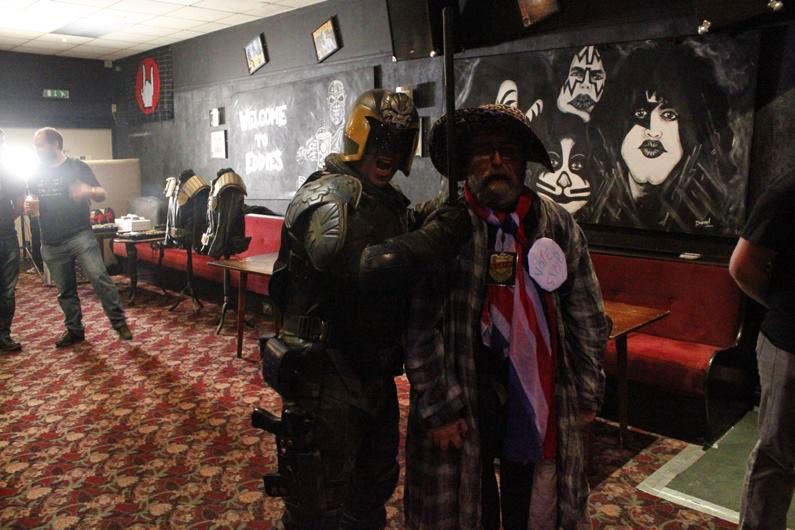 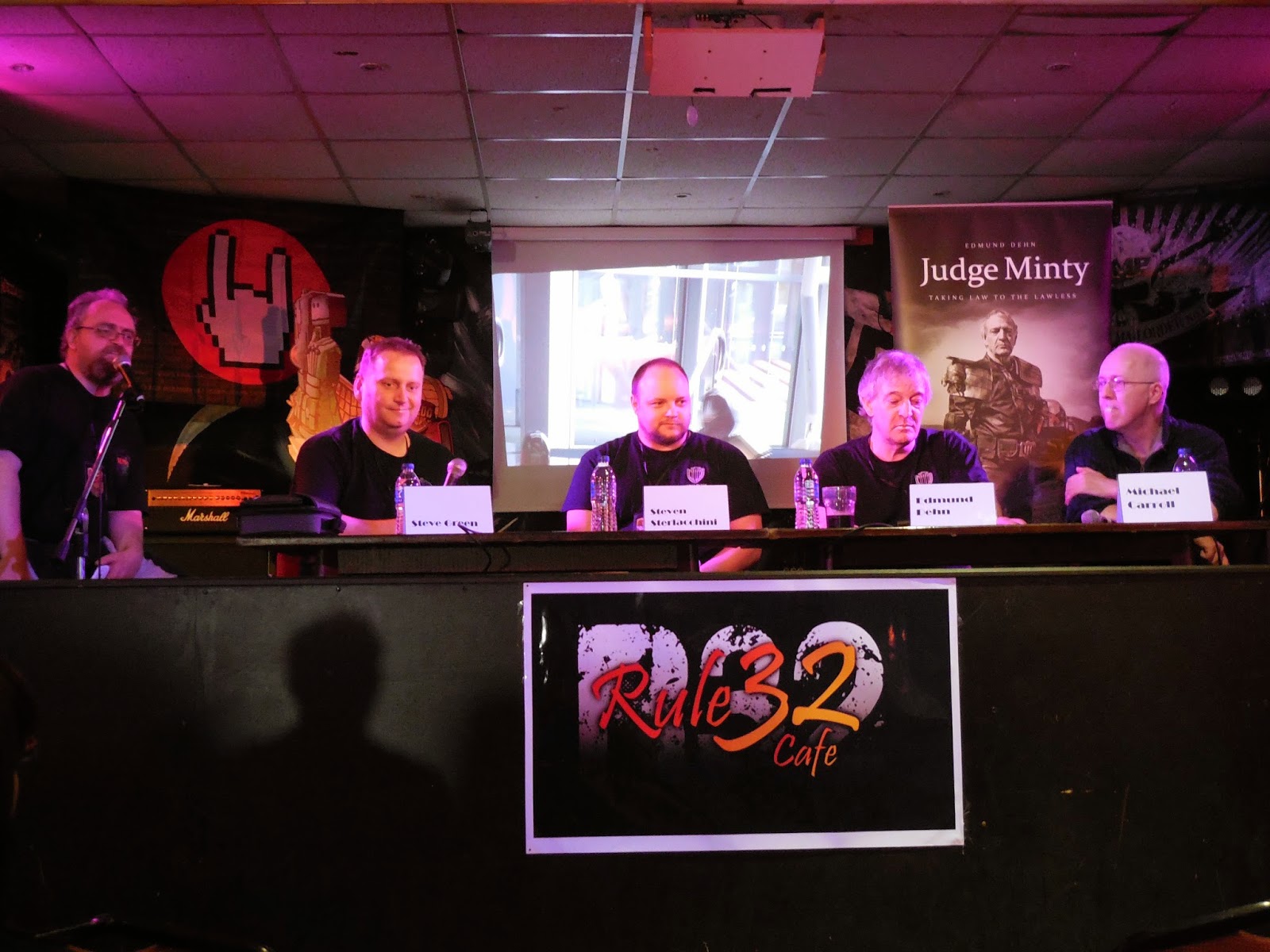 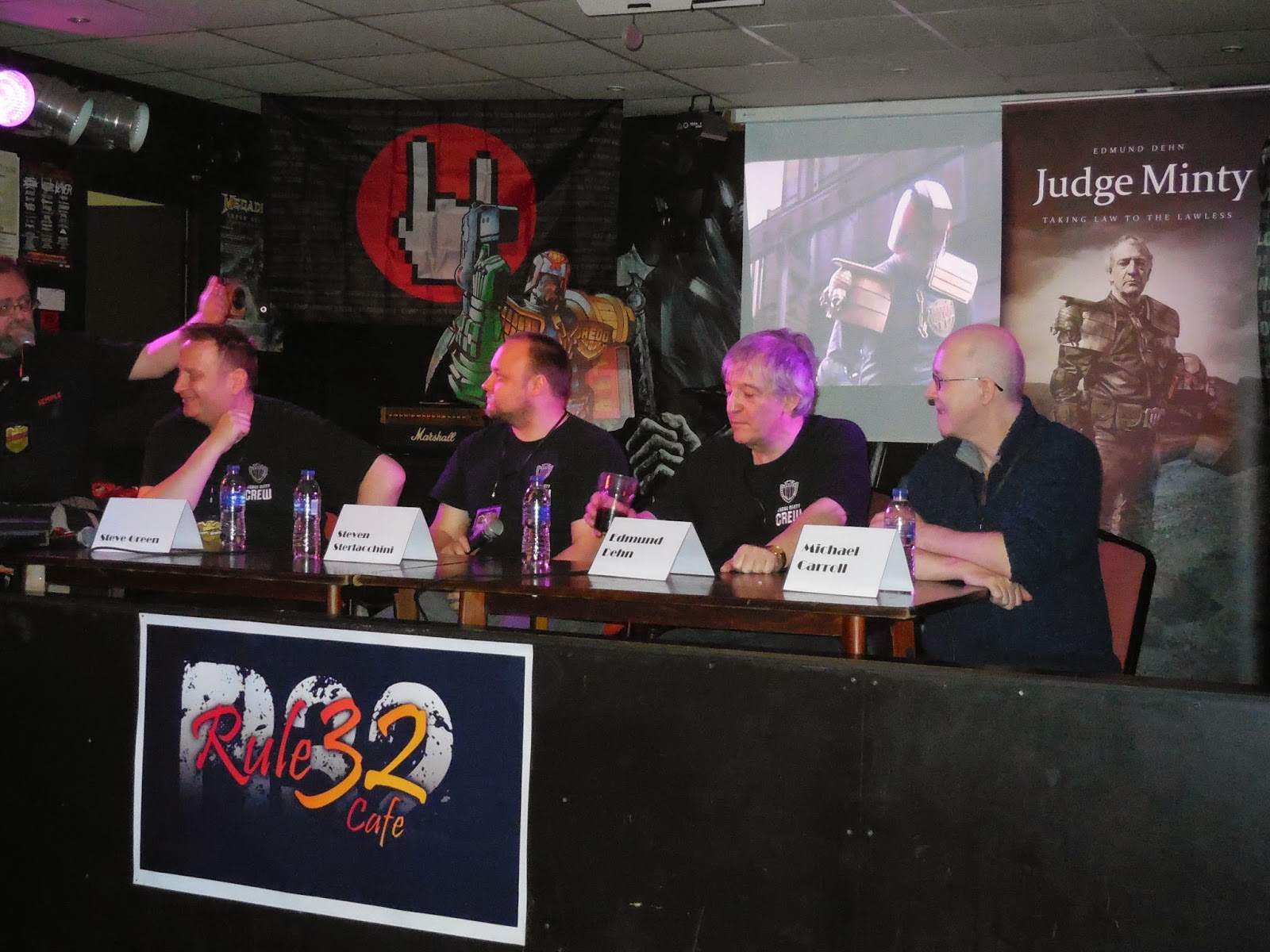 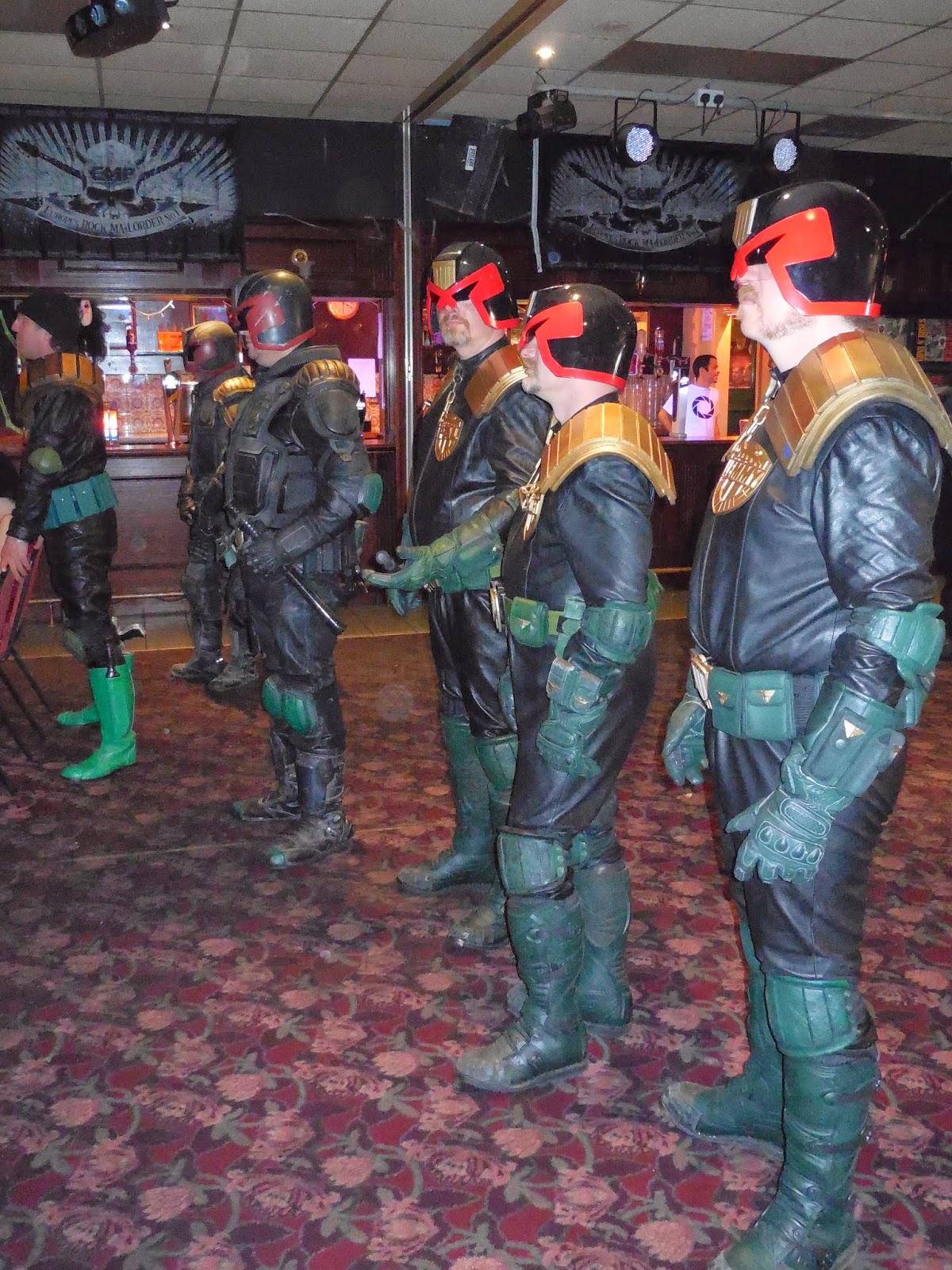 SEE YOU NEXT YEAR!
Posted by John 3 comments: