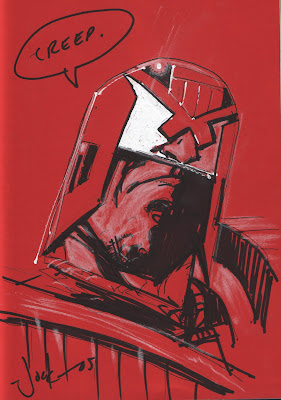 You can't really call most of these sketches as the artists have put so much time and effort into each piece, it seems wrong to give them that title. But that is what they are known as!
I managed to get my first sketches during the time when the Dreddcons were happening. I was more a collector of merchandise at the time but after seeing some of the pieces that people had to show, I joined the bandwagon. I think the first sketch was by Boo Cook and it was Dredd (obviously), since then I've managed to have pieces produced by numerous artists, including Colin MacNeil, Simon Bisley, Jock, Rufus and many others. This first batch is from the Dreddcon's that I went to, not many to begin with but like I said it took a while to start collecting them! I think the long queues didn't help, lol. 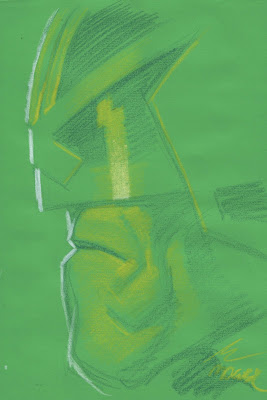 So as you can see I have put a little bit of effort into catching some great artists and having wonderful pieces drawn for me. I really enjoy the whole process that the artist employs as he starts his sketch and how it appears before my very eyes. Some go straight in with the outline and you can see straight away what is coming. Others seem to scribble away, not really doing anything vaguely familier, then all of a sudden the character jumps off the page. During this time I like to have a chat about the actual piece but may end up talking about anything under the sun, which frequently happens.

Above all I find this is one of the best parts of the comics world, chatting to an artist as he draws a unique piece of art, just for you. It takes great skill and talent to produce what they do, especially under the watchful gaze of a fan and with all the distractions of a convention hall.

Here are two of my favourite artists actually doing sketches for me, both were at Dreddcon 6.5 and I'm sure you can guess who they are!

Just realised that the sketches that Simon and Colin are not shown, sorting that out now. Simon's is shown with Jock's, as I couldn't scan the inside page of that RPG metal cover, bloody awkward. 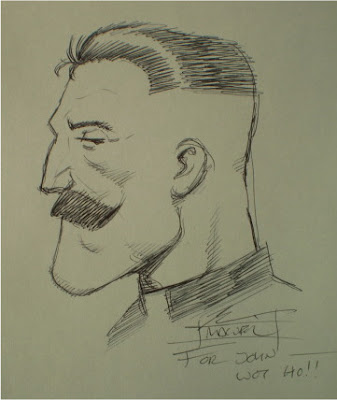 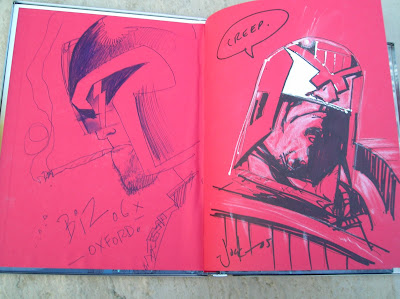