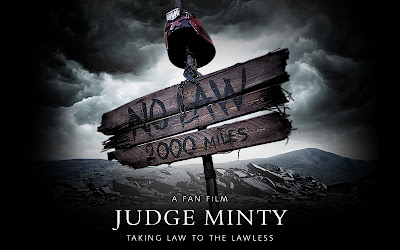 I'm sure you all know about this short film that is currently in production! Well if you visit the Director's blog you will see this sign, along with his notes about the whole project up to now. Obviously you'll look at that blog after you've finished here but before you do anything else you MUST look at the following teaser trailer for this film, it's on youtube if you want to see it a lot bigger. Remember it's a work in progress, so nothing is finished yet!


Anyway after a superb weekends filming in the Cursed Earth, imagine my surprise when this sign fell into my car as we left the location and headed to our homes! Before you ask, I did have permission and I've even been in touch with crew members since, just to verify it as I still can't believe it!

I'm sure that you all know the story about Judge Minty and what became of this lawman. Well as he enters the Cursed Earth he passes this ominous sign that tells him everything he needs to know about what it will be like in his new life.

Now I can't show you any pictures from the shoot just gone that incorporate the sign, as that would spoil things but I can show you some close ups of the sign and where it lives now.

Now because of the inclement weather on the last shoot, I've had the sign in the conservatory drying out. Here's my son holding it just outside there, just to give you an idea of the size of it, look how happy he is! By the way it's taller than that in the film, as you will find out when you read on. 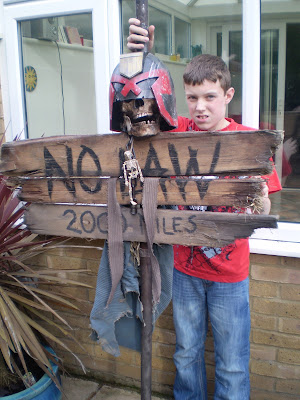 I asked it's creator Daniel Carey-George﻿ of Custom Creations how he went about building this prop and who came up with the idea!

"Basically, I can't remember who's idea the sign was, I think mine, as it was one of the very first things I made for Minty, and possibly before the script was finished- Steve would know for sure, it was about 3 years ago!
The helmet was the very first one I cast up for Minty, so I knew it would probably not be worth using as a finished piece. Instead I weathered it , cut a hole in the top and stuck it over a length of plastic pipe painted up to look metal. Its fiberglass, painted in cellulose with various acrylic washes and highlights.
Funnily enough, the wood used in the sign is actually from the time a container of wood went overboard on the East Coast, and the wood washed up on the beach. It was brand new pine but smashed up, so some of the distressing was done by nature, and I used wood dye and paint for the rest. Its held on to the pole by plastic clips at the back.
I wasn't sure about the final height needed so a long cardboard tube was used to enable me to easily adjust it on site, and I made up a wooden stand for it with a very shallow base to let me rig it in any spot without needing too much extra work to hide the supports.
It was made pretty quickly and became a symbol of the Minty project, and was tweaked a week or so before the shoot with some extra details such as debris at the bottom and some badges hanging from it."
As for the skull.
"Its a cheapo medical skull from ebay. Its supposed to be adult size but really its more female/ teenager/small.
Anyway, I covered it in a light coating of latex (mixed with a bit of tissue paper) over some of the features, and around the jaw. When this dried I removed the springs, etc holding the jaw on, so the jaw just flapped about on the tissue paper/latex mix. I then used a 'mess' of wood stain over the lot."

Here is a series of close-ups of the helmet and skull to give you an idea of the detail that Daniel put into it. 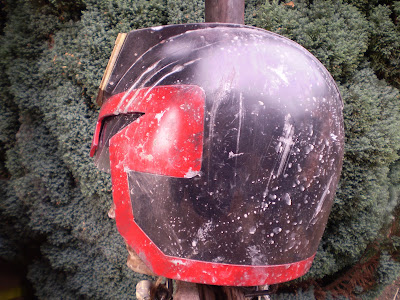 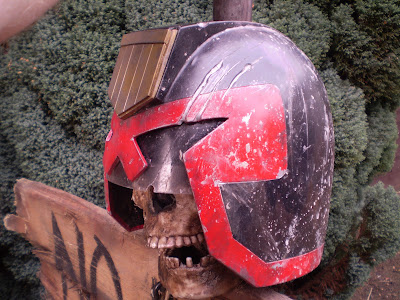 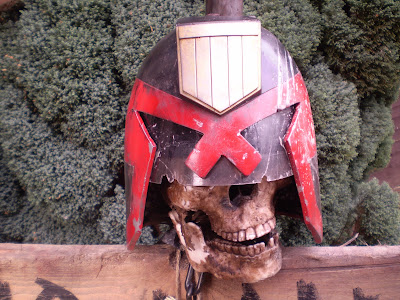 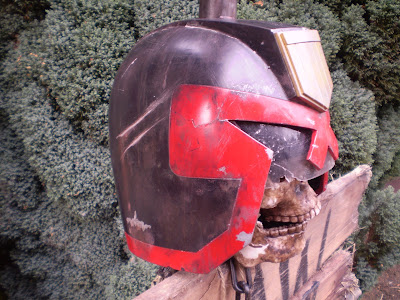 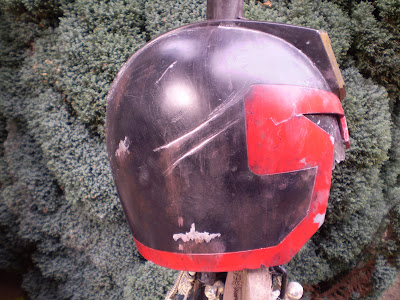 ﻿
I'm sure you'll all agree that it looks superb and show you just how good Daniel's work is. Lastly we have a picture showing it's new home, in the cellar.
Wait till the electric/gas bod comes round next time to read the meter! 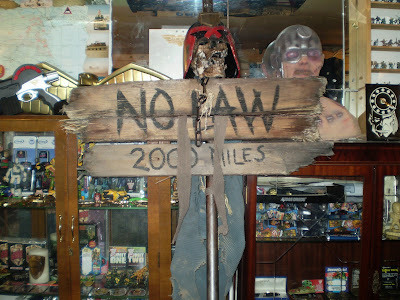